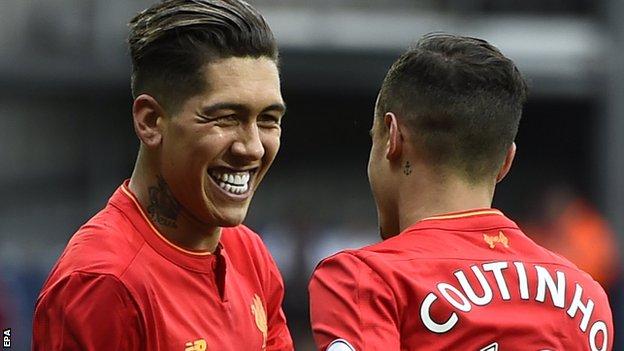 Jurgen Klopp said his Liverpool side were “a joy to watch” as they consolidated their place in the Premier League’s top four with a dominant 5-0 home victory over managerless bottom side Swansea.

The away side responded well and dominated possession for spells in the first half but Roberto Firmino should have doubled the lead when he dragged wide just before the break.

Instead, the Brazil international put his side two goals up six minutes after half-time, firing home from Coutinho’s lofted free-kick.

Nineteen-year-old full-back Trent Alexander-Arnold added a third with his first Premier League goal for the club, chasing down a loose clearance and smashing in off the bar from inside the box, BBC reports.

Just two minutes later, Swansea self-destructed further as Salah pounced on a misplaced pass before cutting back to Firmino to tap home – then Alex Oxlade-Chamberlain completed the rout by planting the ball in the net after another poor clearance.

“After 55 minutes it was brilliant, before that it was work. It was not easy,” Klopp told BBC Sport. “But the last half an hour was fantastic, a joy to watch, a very deserved win.”

The result means the Reds reclaim fourth spot from Tottenham and restore their one-point advantage over the north London side, who briefly moved above them with a 5-2 win over Southampton in Boxing Day’s 12:30 GMT kick-off.

Swansea stay bottom of the table, five points from the safety of West Ham’s 17th place.