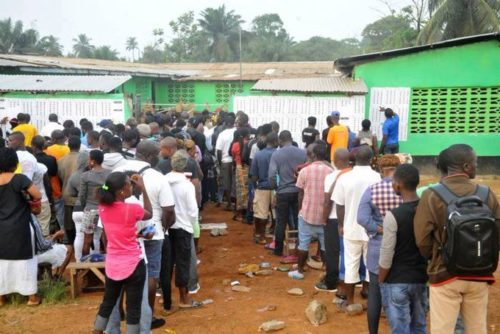 The polls closed at 6 p.m. local time (1800 GMT) followed by sorting of ballots under the watchful eyes of party agents and observers.

Voter turnout in the run-off is widely believed to be poor, compared to the Oct. 10 general elections that witnessed long queues of anxious voters stretching several metres from voting points.

“The turnout that people have been complaining about, from our observation in the places we have visited within Monrovia, it cannot be less than 60 per cent.

“We may not know what is currently happening in other places; we will get reports from our field officers who have gone to the hinterland.

“But from what we personally observed here, I do not completely agree with the assertion that the turnout is quite low,’’ Jonathan said.

The former president told newsmen at one of the polling centres that it was difficult to get 70 per cent turnout in elections globally, and in run-off polls voter enthusiasm was bound to drop.

He said although mobilisation of voters was understandably low since many candidates were no longer in the race, it was NDI’s belief that the process would end successfully.

Jonathan joined other watchers of the exercise to commend the National Elections Commission (NEC) for correcting the lapses observed in the Oct. 10 general elections.

“We started at 7:30 a.m. We have been going round; we monitored the opening process and of course we will also monitor the closing, the counting and the tallying of votes.

“So far, in all the centres and units we have visited, we can see that the election has been going on very well.

“People queue up and they don’t waste much time to locate their voting units compared to what happened in October.

“We must commend NEC because we are told they retrained their staff and placed them in proper position to handle the elections,’’ he said.

Former FIFA World Footballer of the Year, George Weah and incumbent Vice President Joseph are bidding for the top job.