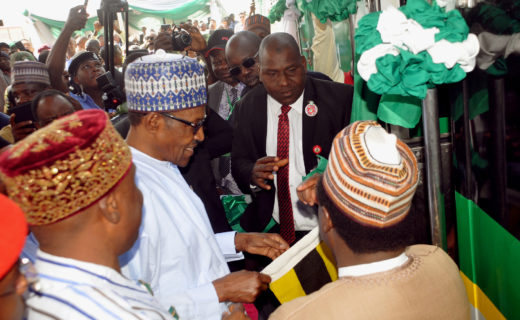 Pic.1. President Muhammadu Buhari (2nd, L) inaugurating one of the Ten (10) train coaches for the Abuja-Kaduna rail service, in Kaduna on Thursday (4/1/18). Left is the Minister of Transportation, Chibuike Amaechi and others.
0048/4/1/2018/Anthony Alabi/BJO/NAN

President Muhammadu Buhari says his administration is committed to strengthening the nation’s railway system in order to boost economic activities in the country.

Buhari made the commitment while inaugurating two locomotives and 10 standard gauge coaches on Thursday in Kaduna.

The President said the procurement of the locomotives and coaches was part of his administration’s resolve to vigorously pursue rail development in the country in line with 25-year national strategic railway master plan.

According to him, “Other supporting projects are the purchase of more locomotives, coaches, wagons, workshops and equipment for new standard rail lines by way of encouraging private sector participation in the railway sector”.

Buhari explained that it was on this basis that the administration was focused on creating conducive environment for private sector participation to strengthen commercial activities using railways systems and promote rapid economic activities.

“By improving the lives of the citizenry and promoting National integrity, our resolve is to promote railway systems to high class standard.

“Therefore, I am using this opportunity to appeal for the support of all relevant stakeholders especially the National Assembly and all development partners in realizing this objective.’’

“The port, when commissioned will provide an easy process for the exportation of farm produce from Kaduna and neighbouring states as well as landlocked countries,’’ the President emphasized.

A dry port is an inland inter modal terminal directly connected by road, rail and air to a sea port, and is usually operated as a centre for trans-shipment of sea cargo to inland destinations.

“Being the first of its kind in Nigeria, it is expected to receive cargo from Apapa Port in Lagos, through the railway or by road and also export goods through the same channel.

“And the idea is to establish Inland Container Depots in the hinterland to reduce the congestion in Lagos ports and provide relief for the busy Apapa road,’’ Buhari added.

On his part, the Minister of Transportation, Rotimi Amaechi noted that the inauguration of the new standard locomotives demonstrated government’s commitments to revitalizing national infrastructure.

“Such commitment is not only key but tangible to all railway projects and its practical outcome is to improve the lives of Nigerians’’ the minister said.