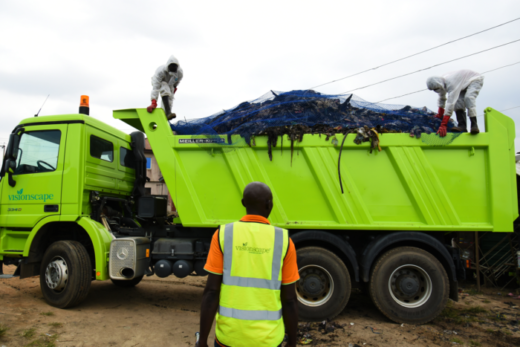 All in quest of a cleaner Lagos: One of the trucks of global waste management group, Visionscape evacuating waste in Lagos.

Adeniji gave the assurance on Friday in an interview with News Agency of Nigeria (NAN) in Lagos.

He said that the new waste management reforms were aimed at ensuring a cleaner environment in the state.

“That same law has made LAWMA a regulatory body, as against the time when LAWMA was only carrying out 90 per cent operations and 10 per cent regulations.

“From this year henceforth, all operations will be carried out by a competent body called Visionscape International, and the agency will handle all waste and refuse issues,” he said.

Adeniji said that 35 per cent of the equipment required for the onset of waste evacuation in the Lagos metropolis had arrived.

According to him, the company will commence the clearing of waste in a fortnight with the available equipment.

“We will soon start living under the conditions of a new programme called the `Cleaner Lagos Initiative’ (CLI) in the next few weeks when the equipment rolls out.

“The little challenges we are facing now are due to the withdrawal of services by the Private Sector Participation (PSP) operators, who had issues with the state government because of the new reform about to take place, which made them stop collecting the waste.

“The residents, too, were not cooperating by paying their dues for refuse collection services but I assure the residents that pockets of refuse seen here and there will be a thing of the past once the CLI becomes operational very soon.

“There will be a little pain for us to get a greater joy,” he added.

Adeniji said that dumpsites were being prepared for the new reform programme, while reconstruction works were underway at the Epe dumpsite.

“In the next few months, two dumpsites will be constructed in Ikorodu and Badagry for effective waste disposal services,” he said.

He called on Lagos residents to exercise more patience, as intervention trucks had started going round to evacuate the waste which was generated during the recent festive period.