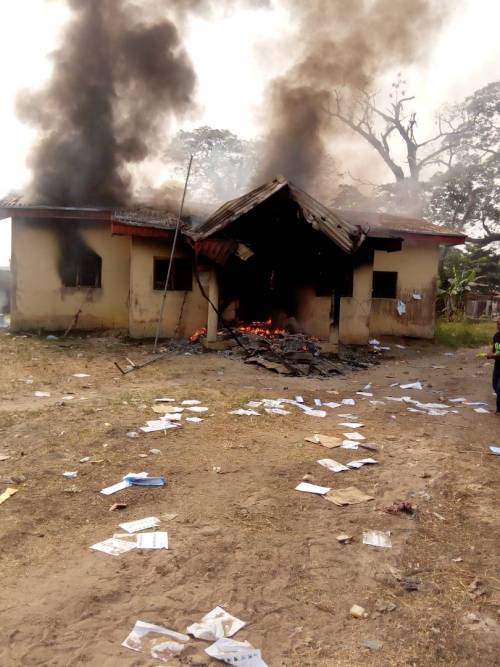 DSIEC office burnt down by thugs

The hoodlums reportedly accused the commission of hijacking election materials for the polls by distributing materials to the strongholds of rival political party.

There were deluge of complaints of irregularities, especially by parties, other than the ruling party in the state. They said all the key adhoc staff of DSIEC were recruited mainly from ruling party.

Meanwhile, travellers passing through the highways linking the state were caught unawares by the restriction of movement in the state.

A disappointed traveller, Chukwudi Akasike, and Punch Correspondent in Port Harcourt expressed his frustration on his facebook and vented his anger: “What is wrong with Nigeria? Why are our politicians so ignorant about those things that are common and taken for granted in other climes/countries? Take a look at the ongoing local government election in Delta State; it is a national disgrace that all major roads leading to and from that state have been blocked and travellers are stranded. This is wickedness and crass irresponsibility on the part of whoever approved that major roads should be blocked because of a mere local government election. Are we living in the cave? As Nigerians, are we cave men and cave women at a time when civilisation is modernising the entire world?

Akasike further disclosed that thousands of vehicles were held up on roads leading to Warri, Asaba, Ughelli and other major roads close to Delta State.

“As I write this, people cannot cross the Niger Bridge in Onitsha because security operatives have been ordered to block the roads. What a shame! Is this a country? Other African countries have since dropped such primitive and primordial method of doing things.”

He sympathised with many travellers, who are currently stranded on roads linking Delta State.