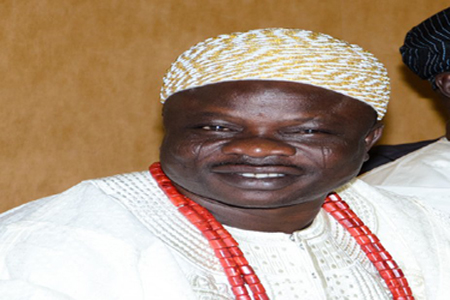 In a bid to recover a debt of N11,280,998,959.78, Asset Management Corporation of Nigeria (AMCON ) has dragged the Olofa of Ofa Kingdom in Kwara State, Nigeria, Oba Mufutau Gbadamosi and his two companies Zarm Poultry and Feeds Mills Limited and Zarm Stores Limited before a Federal High Court in Lagos.

In a statement of claim filed before the court by a Lagos lawyer, OsayabaOsagie, it was alleged that pursuant to its enabling act AMCON sometime in 2012 purchased certain Eligible Bank Assets of the former Oceanic bank in the sum of N1,859,654,737.00 and N4,586,369,001.47 respectively.

As at 8 April, 2017, Zarm Poultry and Feeds Mills was indebted to AMCON to the tune of N3,027,486,610.59 being the unpaid principal and interest on a term loan facility of N2.3 billion that was given to the company sometime in 2006 by the former Oceanic Bank to finance Capital expenditure on its farm at Odonla, Ikorodu, Lagos.

The loan was subsequently further restructured to N4,462,589,667.33 to accommodate the debts arising from unpaid facilities granted Zarm Stores Limited’s other affiliates beside the one of Zarm Poultry and Feeds Mills Limited.

The further restructured term loan was secured by a legal mortgage over a piece of land measuring 818.058 square meters being Block 1B Osborne Phase 1, Lagos and the personal guaranteed of Oba Mufutau Gbadamosi who is the Chief Executive Officer and also the majority subscriber to the shares of the two companies.

It was further alleged that the defendants have not made any payments since the debts were assigned to AMCON in spite of several discussions and negotiations between the parties .

The period stipulated for repayment of the banking facilities had since elapsed but the debts remained due and owing by the defendants to the claimant as interest continues to accrue.

In consequence thereof, the claimant has commenced this legal action for recovery of the outstanding debt from the defendants, as they have no defence to the claimant’s claims.

Wherefore, the claimant claims against the defendants jointly and severally are as follows:
A declaration that Zarm Poultry and Feeds Mills Limited is indebted to AMCON in the sum of N3,027,486,610.59 with interest thereon at the rate of 21%Per annum from 9 April, 2017 until judgement and thereafter at the rate of 10% until total liquidation.

A declaration that Zarm Stores Limited is indebted to AMCON in the sum of N8,253,512,349.19 with interest thereon at the rate of 21% per annum from May 1st 2017 until judgement and thereafter at the rate of 10% until total liquidation, among others.