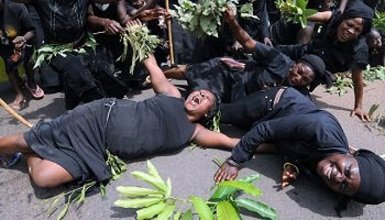 Residents of Makurdi remained mournful on Thursday as bodies of the victims of the Fulani herdsmen attacks of Jan. 1 and 2 on parts of Benue were given mass burial.

Government offices, commercial banks, markets and schools were closed the state capital in observance of the work-free day earlier declared by the State Government in honour of the victims.

Gov. Samuel Ortom had also declared three days of mourning for the victims of the attacks on communities in Logo and Guma Local Government Areas of the state.

Some of the residents expressed worries over the incessant attacks on farmers in the state and said that the acts were unhealthy for an agrarian state like Benue.

They said that there was a need for peace to reign for the growth and development of the state.

Mr Thomas Shima said that all hands must be on deck to address the crises, adding, “we are mourning today; we still don’t know tomorrow.”

Shima appealed to the Federal Government to tackle the security challenges in the country more vigorously.

Mrs Blessing Okoh noted that only God and the federal government could stop the killings and called for more prayers for the state and the nation.