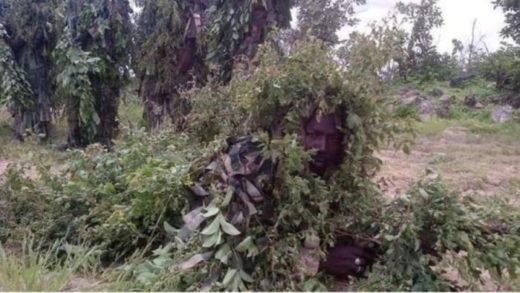 The human camouflage. Nigerian soldiers disguised as trees and shrubs inside Sambisa forest. Look closely, the standing trees are not trees at all. They are Nigerian soldiers waiting patiently to spring a surprise attack on Boko Haram insurgents

Mrs Amina Muhammad, the UN Deputy Secretary General, on Wednesday in Maiduguri, laid wreath in remembrance of soldiers who lost their lives in the fight against Boko Haram insurgency in the northeast.

Muhammad, accompanied by Mrs Zainab Ahmad, the Minister of State, Budget and National Planning, visited the military cemetery at the Maimalari Cantoment prayed and laid a wreath in honour of the fallen heroes.

“We are here today to present our special prayers to the fallen heroes and their families.

“We thank God for their service to the nation and fight against Boko Haram insurgency to bring peace and stability to the country.

“We remember today is the most appreciable; May their souls rest in peace,”

Other dignitaries at the event include Maj.-Gen. Rogers Nicholas, the Theatre Commander, Operation Lafiya Dole, Mr Edward Kallon, the UN Humanitarian Coordinator, Mrs Mairo Mandara, the Head of Bill and Melinda Gate Foundation as well as other UN officials.

Also, Brig.-Gen. Abdulrahaman Kulliya and Col. Onyeama Nwachukwu, offered prayers for repose of the souls of the departed soldiers.

The UN deputy secretary had earlier visited the Military Control and Command centre, and held a closed door meeting with  the Theatre Commander.

Muhammad had also paid a brief visit to Bama, one of the communities liberated from Boko Haram insurgents.