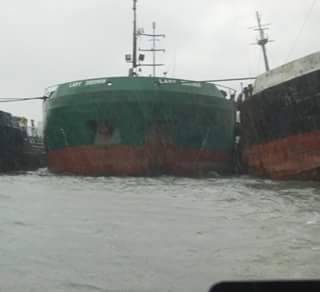 The Nigerian Navy in Lagos on Thursday said it arrested 19 vessels carrying out illegal activities within the nation’s territorial waters last year.

““Since June 2017, the patrol efforts at sea, complemented by the Maritime Domain Awareness Assets led to the arrest of some vessels found carrying illegal activities at the sea.

“”It is pertinent to state that most of these vessels have been handed over to relevant prosecuting agencies.

“”This is in line with the Harmonised Standard Operating Procedures on arrest, detention and prosecution of vessels and persons in Nigeria’s maritime environment,’’ he said.

Abbah said that the vessels were arrested for illegalities ranging from piracy, crude oil theft, illegal and unregulated fishing, sea robbery, amongst others.

In his remarks, Chairman of the Committee, Abdussamad Dasuki, said the team was on-the-spot assessment of the units and bases under the Navy’s Western Naval Command in Lagos.

Dansuki flayed the Nigeria Maritime and Safety Agency (NIMASA) for awarding a multi million dollar contract for patrolling the nation’s maritime domain to an Israeli firm.

He said ceding patrol of the nation’s waterways and other critical national assets to such foreign company was to the detriment of the navy.

He added that the constitutional role of the navy was to safeguard and patrol the coastal waters and the nation’s Exclusive Economic Zones (EEZ).

“”The maritime trust fund fell under maritime security and anti-piracy, thus the move to circumvent the navy out of its constitutional roles will not be allowed to happen.

“”One of the challenges we are having at the House has to do with the sister agency of the government which is NIMASA.

““A situation whereby it’s giving out jobs that are ideal for the Nigerian Navy and contractors in Nigeria to foreigners, especially jobs that have to do with our security, is not acceptable,’’ he said.

““We have the Nigerian Navy and it should be empowered. We should promote what we do locally so I see no reason why we cannot contract the job to them.

“”It is not acceptable and we have made it loud and clear. We will continue to work until something is done about that particular situation,’’ he said.

In another development, the FOC said that naval personnel deployed to Igbokoda in Ondo State, responded to a distress call that some militants had attacked and disarmed some policemen.

“”Our men at Igbokoda raced to a village called Aiyetoro after they got a signal that some hoodlums had attacked and disarmed some mobile policemen stationed there.

“”Our men gave chase and disarmed them. They were able to recover two of the three arms from the militants. We are on top of the situation,’’ he said.