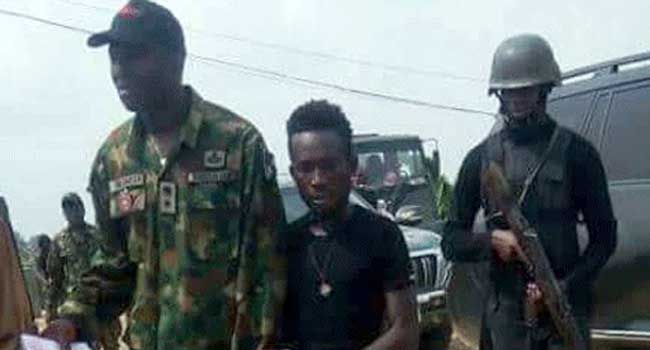 Karowei (middle) when he was arrested by the military
Photo: Channels tv

A statement from the Joint Task Force Operation Delta Safe and signed by Major Ibrahim Abdullahi confirmed that the kidnap kingpin was killed along with some members of his gang during a gun battle.

The statemnt said in line with the mandate to tackle the security challenges posed to the safety of lives as well as critical oil and gas facilities in the Niger Delta region, a deliberate operation was conducted by the military in the southern part of the country.

“A clearance operation was consequently initiated by the Commander of the JTF, Rear Admiral Apochi Suleiman, to sanitise the region of militants, cultists, sea robbers and kidnappers, among other criminals,” it said.

Karowei, who reportedly kidnapped late Squire and three other British Missionaries on October 13, 2017, in Delta State, was arrested along with his said gang members on Thursday during the clearance operation.

His group was also accused of masterminding several abductions, robberies, and raping of innocent women in the region, including unprovoked attacks on military locations in Delta and Bayelsa states.

“On January 7, 2018, Karowei and his gang attacked own troops at Bolu Ndoro forest which led to the death of four Military OPDS personnel,” the statement said.

“After his arrest, Mr Karowei confessed to several criminal acts and led troops to his camp to recover the cache of arms and ammunition in his possession as well as to persuade other members of his gang to surrender.

“However, in a twist of events, Karowei’s recalcitrant group laid an ambush and attacked Task Force troops in a gun battle at his camp deep in the forest. This was in a bid to rescue Karowei from own troops.

“The superior firepower, resilience and gallantry of own troops countered this snap attack which resulted in the death of several of Karowei’s henchmen and the kingpin, Karowei who tried to flee to rejoin his cohorts,” the statement obtained by Channels tv added.

Rear Admiral Suleiman said the group has constituted serious security menace around Delta and Bayelsa states and commended the support of the residents.

He, however, sought additional selfless support from law-abiding citizens to uproot all criminals causing mayhem within the Niger Delta region.

The Commander urged the people to go about their legitimate businesses as the waterways are now safe and secure.

He assured them of the Task Force’s commitment to stemming all criminalities in the region in line with the mandate of the Chief of Defence Staff.