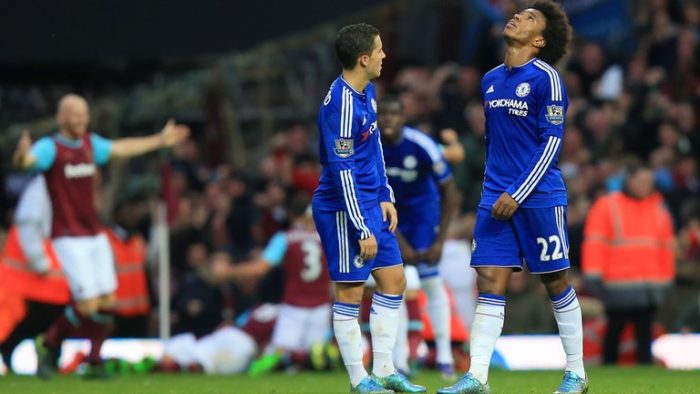 Chelsea failed to win for the fourth match in a row in all competitions as they scraped a 0-0 draw against 10-man Leicester on Saturday.

The Blues had won their previous seven Premier League home matches, but were fortunate not to lose to the Foxes after a lacklustre display.

Shinji Okazaki, Wilfred Ndidi and Riyad Mahrez all went close as the visitors created a number of chances in a dominant opening hour.

Sky Sports reports that Ben Chilwell was sent off for the visitors in the 68th minute for a second yellow card, but Chelsea still created few clear openings and remain without a win in 2018.

Antonio Conte had said before the match that Leicester were the “worst” side for Chelsea to face after a busy recent run of fixtures, and so it proved as the visitors came flying out of the traps and immediately applied pressure.

Okazaki missed the target from eight yards out, Jamie Vardy poked a shot wide and then dragged another across goal before Thibaut Courtois made an excellent diving stop to keep out a header from Ndidi.

Kasper Schmiechel was hardly tested at the other end aside from pushing an effort from Cesc Fabregas away.

And Leicester continued to create chances against a below-par Chelsea, with Mahrez firing over from the penalty spot and Marc Alrighton shooting past the post.

Chelsea lost Gary Cahill to injury and did not improve after half-time as the Foxes controlled possession and went close to the opener with a deflected shot from Mahrez that spun just wide.

The hosts were handed a way into the game when Chilwell was dismissed after two bookings in five minutes, but even then the closest they came was an effort from Tiemoue Bakayoko that went over the bar.