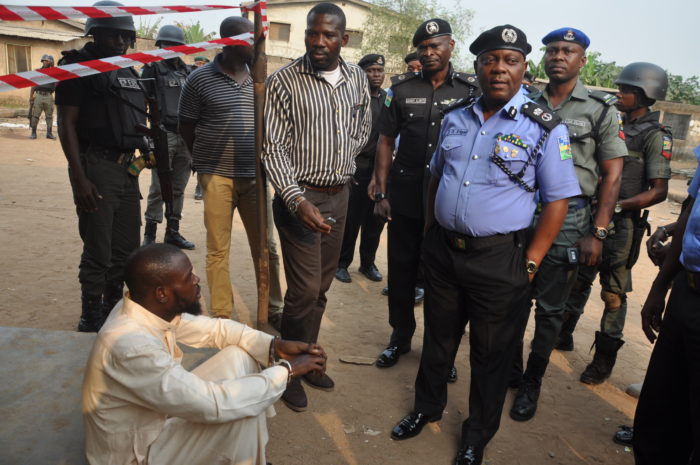 Commissioner Of Police, Lagos State, Imohimi Oluwole Edgal
addressing the Press while the Suspect Kayode Abdul-Fatai looks on during his arrest at his shrine in Lagos, on Tuesday,

Officers of the Lagos State Police Command on Tuesday arrested an Islamic cleric, Alfa Kayode Abdul-Fatai in Alakuko area of the State for being in illegal possession of human parts including a female private organ.

The suspect, who was arrested at No. 4, Okedumola Street, Off Obadare area of Alakuko, was said to have also been caught with female heart and a female lap discovered in his room.

While confirming the arrest, Public Relations Officer of the State Police Command, SP Chike Oti, said the Islamic cleric was arrested following a tip off and investigation by the officers in the command.

Oti said the suspect, during interrogation, revealed that the said human parts were given to him by an accomplice who has also been rounded up.

According to Oti, the suspect and the accomplice would be charged to court at the end of investigation.

He said the Commissioner of Police, Imohimi Edgal, particularly urged members of the public to be conscious of the activities of people living within their vicinity, and report any suspicious movement to law enforcement agencies.

”The CP urges members of the public to embark on ‘Operation Know Your Neighbour’, because the Alfa was staying in a compound without his neighbours knowing what he does for a living,” Oti said.