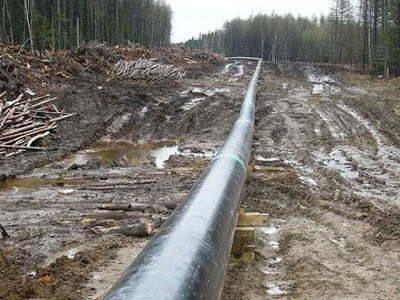 The Nigerian Gas Company (NGC) on Tuesday said it had commenced the process of fixing the exploded gas pipeline at Ugbokodo-Okpe community in Okpe Local Government Area of Delta.

Mr Kingsley Onaipia, an official of NANPIST Venture, the company clearing the affected area for proper assessment and evaluation of the damaged pipeline disclosed this to newsmen at the site.

He said that the indigenous firm was hired by NGC to clear the area before the commencement of repairs on the pipeline.

Swamp boogies and others have already commenced work at the site.

“We are on site at the instance of NGC, to enable the management ascertain the extent of damage of the gas pipeline.

“We have commenced evacuation and as soon as we conclude, proper repairs will commence immediately by the company’s management,’’ he said.

An, official of the NGC, who craved anonymity also confirmed the development to newsmen.

“We want to effect repairs on the damaged pipeline as soon as possible,’’ the official said.

Ajidsha, however, expressed dissatisfaction with the process, noting that the community was not consulted before mobilising the contractor to site.

He also said that there was another damaged gas pipeline about 200 meters away from the residential area in Ugbokodo-Okpe community and urged the NGC to quickly effect repairs before it caused another disaster.

“NGC has come to see us, they promised to come back after they have ascertained the extent of the damage.

“But we are not satisfied with the step taken so far because they did not tell us before mobilising to site.

“Although, no life was lost in the incident, the extent of damage was massive with thick flame that consumed fishing nets, boats and other items in the creek,’’ he said.

The community spokesman, however, said that there was the need to compensate the people for the damage, assuring NGC of a peaceful atmosphere for negotiation.