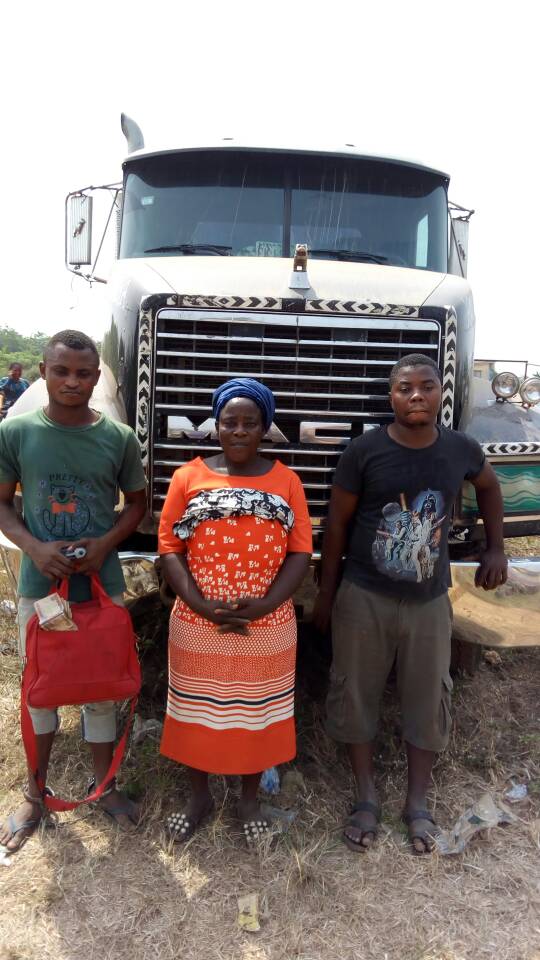 The suspects and the hijacked truck

The Ogun State Police Command has arrested three suspects who hijacked a truck loaded with 203 bags of rice at Ijebu-Ode.

The three suspects, Animasaun Lekan, 26y; Omotayo Sogo, 34 and Olayemi kehinde, 48; were arrested on Tuesday following a complaint by one Izah Ekene of 6 Mabogunde Street, Oju-Ore, Ota who reported at Igbeba Division that he hired a truck to convey 203 bags of rice, valued at N2.024 million to Kwale in Delta state, but on getting to Ijebu-Ode, the truck driver and Lekan Animasaun brought out a gun, pointed it at him and pushed him out of the truck and diverted the rice to an unknown place.

They also took away his bag containing N50,000 and ATM card. Following the report, the Divisional Police Officer (DPO) at Igbeba Division, CSP Adebiyi Ademola detailed his men to go after the hoodlums.

Their efforts paid off on 11 January when two of the suspects, Lekan Animasaun and Sogo Omotayo, were apprehended through technical intelligence.

Their arrest led to the arrest of the receiver Olayemi Kehinde and the recovery of the truck.

Also recovered from them was a bag containing the victim’s ATM card, N19,000 and a toy gun used in robbing their victim.

The state Commissioner of Police Ahmed Iliyasu has ordered the immediate transfer of the suspects to the Federal anti-robbery squad for investigation and prosecution.