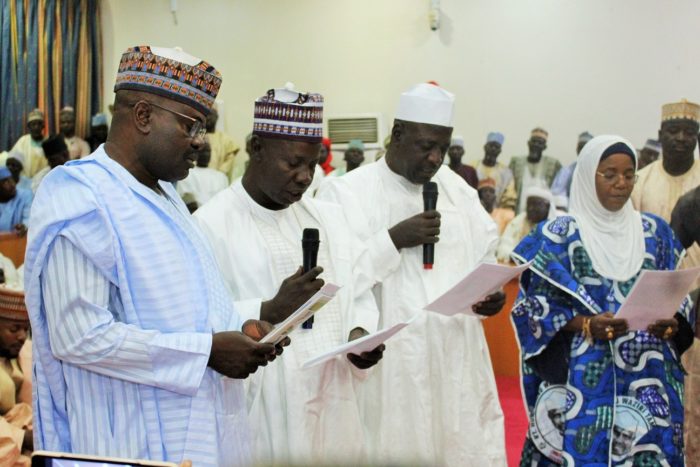 Governor Aminu Waziri Tambuwal has sworn-in Sokoto’s first female professor and three others as commissioners into the state executive council.

Similarly, the Governor swore-in a former member of the House of Representatives, Hon Umar Bature and a former Rector of the state Polytechnic, Dr. Bello Rabiu Alkali as Special Advisers and Alhaji Bello Buba as the Executive Chairman of Wamakko Local Government Area.

Speaking at the swearing-in ceremony in Government House, Tambuwal tasked the new appointees to see their appointments as call to service.

“You were all selected based on merit and your track record in the service of Sokoto State. You are all experienced in your various fields of human endeavour and the state looks forward to getting positive contributions from you.

“Professor Aishatu has especially made left an imprint in the area of girl child education in Sokoto, and we expect her to use her wealth of experience to improve the education sector,” the Governor added.

Tambuwal said government is desirous of affecting the lives of the people positively, and will continue to explore various avenues to improve governance process in the state.

He said in the light of this, the government will go ahead with earlier plan to establish the ministry so as tap from various renewable energy sources available in the state.

Addressing the Wamakko LGA chairman who was recently elected, Tambuwal urged him to bear the challenges of local administration with honesty and integrity.

The event also witnessed the swearing-in of Hassan Maccido as Permanent Secretary, while Umar Ahmad, Bello Mailato, Ahmad Rufa’i Ibrahim and Muslim Adamu as Directors-General in the state civil service.