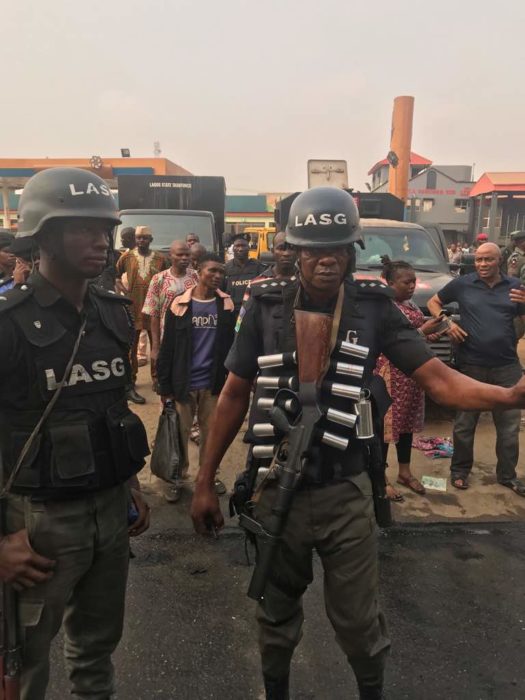 There was pandemonium in Abule Egba area of Lagos, Southwest Nigeria on Wednesday morning following the killing of a rice smuggler by suspected Customs officers.

PM News gathered that customs officers had chased the rice smuggler to Abule Egba in the early hours of Wednesday before shooting him dead and ran away.

Police source said the body of the deceased was seen lying on the ground this morning while bags of rice that were smuggled were seen inside the danfo bus, with registration number Lagos/RKY/1953506.

Stains of blood was seen on the body of the bus and some bags of rice.

Irate youths burnt tyres and blocked the express road in protest over the killing and the refusal of the police in the area that the dead body should not be evacuated from the scene further fuelled the crisis.

Officials of the Rapid Response Squad, RRS and taskforce officials were quickly drafted to the area to quell the riot while Armoured Personnel Carrier, APC was also deployed.

As at this morning, motorists avoided the Abule Egba axis, while those who dared, were forced to turn back as hoodlums were on rampage.

People were seen running helter and skelter to avoid being caught in the crisis.

It took the intervention of the RRS, led by their commander, Tunji Disu, the taskforce, police from Oke Odo Police Station and others to restore normalcy to the area. Also on ground were the Fire Service and the Lagos State Neighbourhood Safety Corp, LSNSC.