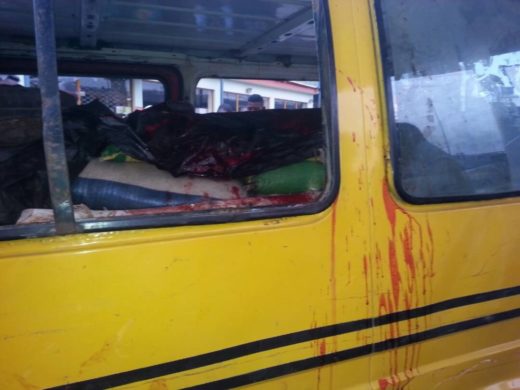 The bloodstained commercial bus, loaded with smuggled rice, in which Toheeb Olayiwola was allegedly shot dead by customs officials.

A bus conductor, identified as Toheeb Olayiwola, was shot dead in Abule-Egba area of Lagos on Wednesday, allegedly by customs men chasing a bus loaded with smuggled bags of rice.

An eyewitness, Ahmed Ogundairo, told newsmen that the victim was in the bus with registration number LND685XJ coming from Sango and headed toward Lagos.

Ogundairo said that customs men accosted the bus at Abule Egba and started shooting sporadically which resulted to the victim’s death.

“The commercial bus, which was loaded with bags of rice, was en-route Mushin from Sango when the customs stopped the bus and started shooting.

“My friend was inside the bus to assist in offloading the rice but he was shot dead when he tried to escape from the scene.

“The bus was hired to deliver the rice to Mushin,’’ he said.

Another eyewitness, who spoke on condition of anonymity, told NAN that the victim was not a smuggler but a transporter with a commercial bus.

A policeman from Oke-Odo Division, who was at the scene of the accident, said that no official statement could be made until the arrival of the Divisional Police Officer.

He said that the incident occurred at about 6.30 a.m.

There was no customs official at the scene to give an account of the incident but LASTMA officials were seen controlling vehicular traffic.

Angry youths who protested the killing set bonfire under the bridge while the corpse of the victim was at the scene at 7.30 a.m. when newsmen left the area.

Attah said that the team trailed a vehicle loaded with smuggled rice to Abule-Egba, a suburb of Lagos.

He said the customs men were mobbed by the smugglers who prevented the officers from carrying out their duties.