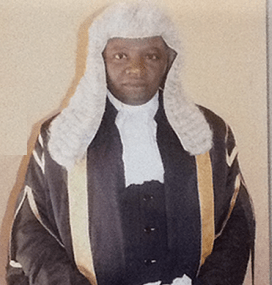 Also arraigned alongside Yinusa is one Esther Agbo, a staff of Rickey Tarfa chambers.

In the five-count charge brought before Justice S. O Solebo, Justice Yinusa is alleged to have received several sums of money from senior lawyers, Joseph Nwobike and Rickey Tarfa to pervert the course of justice

He was particularly alleged to have received N1.5m from Joseph Nwobike to give a favorable ruling in a matter before him.

Justice Yinusa was also alleged to have on 5 March, 2015, received another N750,000 from Nwobike in order to give a decision in his favour.

The EFCC also alleged that Esther Agbo being a staff of Rickey Tarfa law firm offered Yinusa N1.5m to influence a matter which the chamber has before the him.

Justice Yinusa and Esther Agbo however pleaded not guilty to the charges.

As at the time of filing this report, Yinusa’s defence team are arguing their bail application.