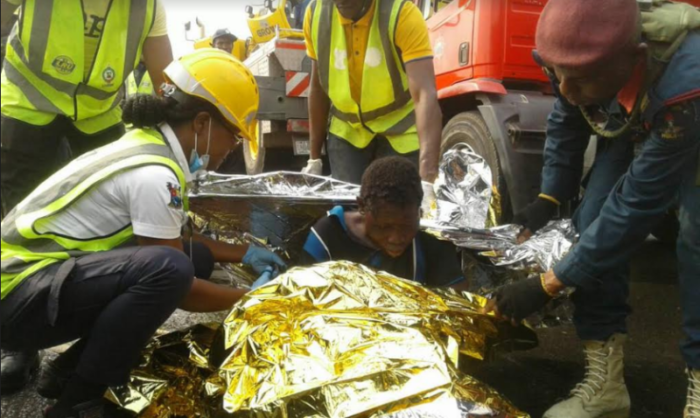 The victim after he was rescued

LASEMA’s Response Team rescued the victim at the early hours of Wednesday.

The incident came barely two weeks after a similar incident wherein a middle aged man was rescued alive by the LASEMA Response Team and other emergency agencies at the opposite end of the same environment.

“The victim, an adult female was reportedly said to be walking through the muddy soil and eventually got trapped in the mud. The timely intervention of the LASEMA Response Team, the Lagos State Fire Service and other emergency responders culminated into the rescuing alive of the victim.

“The victim was rescued with the aid of the LRU heavy duty equipment (Crane) assisted by officials of the Lagos State Fire Service. Upon rescue, the victim was administered first aid treatment and later moved to the Lagos State Teaching Hospital for proper medical treatment,” Tiamiyu explained.

Tiamiyu, who supervised the rescue operation said it was difficult to ascertain why and how the incident occurred as the lady was said to be presently traumatized and required medical attention for stabilization.

He, however, advised that Lagosians should be very careful when moving around muddy area.

Tiamiyu enjoined residents to report any emergency in their surroundings in time through the emergency toll free number 112/767.