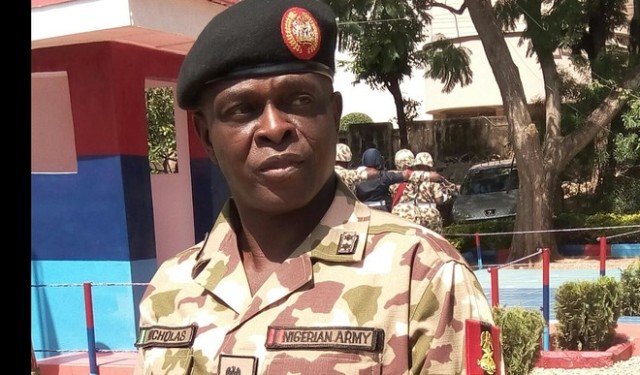 Maj.-Gen. Rogers Nicholas, the Theatre Commander, Operation Lafiya Dole, has called on people to support the military to fast track successful completion of the counter-insurgency operation in the northeast.

Nicholas made the call when he visited troops in the frontline on Wednesday in Magumeri, Gubio and Mobbar local government areas of Borno.

He said that it was imperative for the communities to be vigilant and provide useful information to security agencies on suspicious persons in their communities.

“We always asked that everybody should be on board in the campaign against insurgency, we expect everybody in the northeast to support the military to achieve the end set; that is to do away with insurgency completely.

“We are asking people to give us information; intelligence, when you see anything you report to us as quickly as possible, if you have any information no matter how little it is just pass the information to us.

“Communities must show resilience and take security into their hands; they should also be able to provide little security for themselves not just give in when two Boko Haram insurgents come with motorbike to harass them, they should be able to take on them.

“So we are expecting people across the board to support the military in the campaign against insurgency, we expect people to support us with everything including prayers”.

Rogers tasked commanding officers in the frontline to lead their men well to enable them crush the Boko Haram insurgents.

He advised the commanders to be creative and demonstrate high sense of leadership in the management of their commands.

“We are making serious progress and dealing with the insurgents very well, it is a good news for all our soldiers so that we can finish this operation as quickly as possible so that you can go back home to your families”.

Nicholas disclosed that the Federal Government had adopted proactive measures to ensure adequate provision of logistics and improvement of soldiers’ welfare.