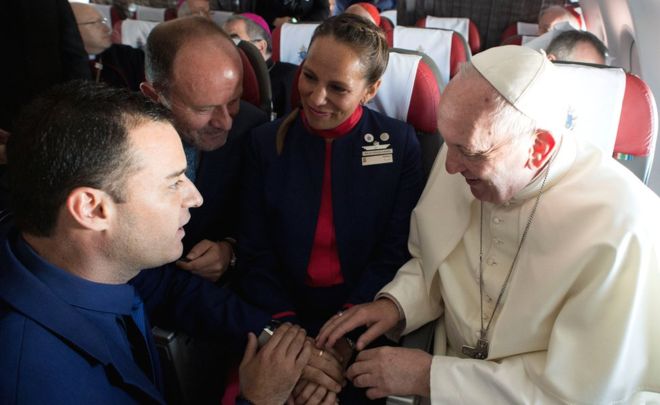 The couple asked Pope Francis to simply bless their marriage, but he had other ideas

Pope Francis has made history by performing a wedding ceremony for two flight attendants on board a plane travelling between cities in Chile.

Paula Podest Ruiz, 39, and Carlos Ciuffardi Elorriga, 41, had been married earlier in a civil service but asked the Pope to bless their marriage.

The couple said they were unable to conduct a ceremony in their church in the Chilean capital, Santiago, after it was damaged in an earthquake in 2010.

Pope Francis suggested performing the brief ceremony on his short flight from Santiago to the city of Iquique in northern Chile.

He then carried out a Catholic wedding service for the couple, lining up the airline’s boss as a witness.

A travelling cardinal provided a hand-written religious marriage document on a single sheet of paper, which was signed by the bride, groom, and witness.

The flight was provided by Latin America’s largest airline, Latam, and the journey forms part of the pontiff’s tour of Chile.

On Wednesday, Pope Francis visited the city of Temuco in Chile’s southern Araucania region, where he called for unity in one of the country’s longest-running conflicts.

In a public address, the pontiff said that “destructive violence” between the indigenous Mapuche people and the state was not the answer.

The region has experienced conflict for centuries, sparked by issues including ancestral land ownership and legal recognition for the Mapuche language and culture.

Pope Francis has also used his trip to meet victims of sexual abuse by priests in Chile.

He is wrapping up his visit to the country on Thursday with an open-air mass celebration in Iquique, before heading to Peru for the final leg of his two-nation trip.