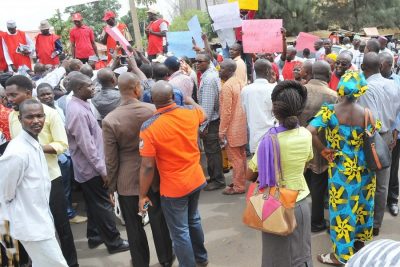 The Kaduna State Wing of the Nigerian Union of Teachers (NUT) says the 21,780 primary school teachers sacked by Gov. Nasir El-Rufa’i should reapply.

The state NUT Chairman, Audu Amba, told the News Agency of Nigeria (NAN) in Kaduna on Friday that the affected teachers would “reapply, sit for another examination and if passed, they will be reinstated to their previous positions.’’

The teachers were sacked for allegedly failing a competency test held in June 2017.

Amba said Gov. El-Rufa’i had directed the State Universal Basic Education Board (SUBEB) to open a window for the sacked teachers in its continuous recruitment programme.

According to him, it is a new window of opportunity for the affected teachers to be reinstated.

“We therefore, consider this as an achievement to our struggle, and collectively agreed to call off the strike.

“We are not against any examination to determine the quality and competency of teachers; our problem is the modalities and the processes that the test in question was conducted.

“What is agreed is that when writing the examination, the affected teachers would be required to indicate their scores in the controversial competency test of June 2017.

“Therefore, if our teachers would be given another opportunity to sit for another examination and be reinstated, I feel it’s something we could work on to ensure that larger percentage of the affected teachers got their jobs back.’’

He said that the affected teachers have been directed to await announcement by SUBEB on a date for another recruitment exercise for them to reapply.

Meanwhile, the Commissioner for Education, Science and Technology, Ja’afaru Sani, said that 10, 000 of the affected sacked teachers had re-applied.

He said that although the sack order remained, the government would consider those that reapplied if they pass the tests to be conducted for them later.

On whether the teachers would be reinstated to their previous positions, the commissioner said the Head of Service would determine that based on civil service rules.

“Notwithstanding, about 10,000 of them reapplied and if they pass, they would be reemployed.

“The new window is particularly for the remaining 11,780 who did not reapply to do so and would be given priority.’’

The commissioner said that other issues raised by the NUT including welfare, promotion and salary arrears would be looked into.

According to him, the state government will soon come out with a plan to address teachers’ professionalism and welfare.

NAN reports that most public primary schools have no teachers since the sack of the 21, 780 teachers by the state government.

Sani acknowledge the problem, adding that SUBEB has been directed to redeploy teachers to such schools pending when the new set of teachers would be recruited and posted.

“In the next couple weeks, the first set of teachers, about 10,000 of them would be recruited and posted to the worst hit schools with few or no teachers following the sack exercise.

“Also, retired teachers and other professional teachers with time to spare have indicated interest to voluntarily teach the pupils until teachers are recruited to fill the gap,’’ the commissioner said.

However, NAN reliably gathered that only 4,000 out of the more than 43,000 applicants who sat for the recently conducted aptitude test for new teachers scored 75 per cent and above.