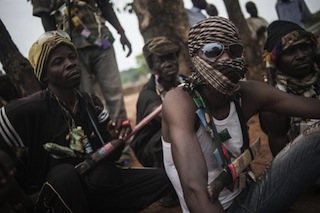 Anti-Balaka militia members rest in the outskirts of Bambari

The UN Mission in the troubled Central African Republic (MINUSCA) has given armed groups in the north of the country 48 hours to clear out.

The mission said it wanted to clear a 50-kilometre perimetre around the town allowing displaced persons to return.
Over the last three weeks, some 60,000 people, mostly women, left everything behind to escape clashes between the armed groups; Justice Riot and the National Movement for the Liberation of the Central African Republic.

“Again, civilians in Central African Republic are paying a heavy price in clashes between armed groups since the end of December 2017, fighting between armed movements.

“The displaced persons have ended up in Paoua, where some 40,000 residents took them in. Now the food and water is running out, the CAR Humanitarian Coordinator Najat Rochdi, said.

According to him, the humanitarian community is responding to the needs of tens of thousands of newly displaced people who have fled ongoing clashes between armed groups in the northern region of Paoua.

Humanitarian agencies are also distributing hygiene kits to contain the spread of contagious diseases, while the Government has provided soap and clothes, Rochdi said.

“Yesterday, aid workers also began the construction of community hangars to temporarily shelter those displaced who are not staying with host families.

“More displacement is expected as fighting continues. Paoua town, which previously had 40,000 inhabitants, has seen its population triple in a few weeks. Villages 50 kilometres north of Paoua are almost empty,” he said.