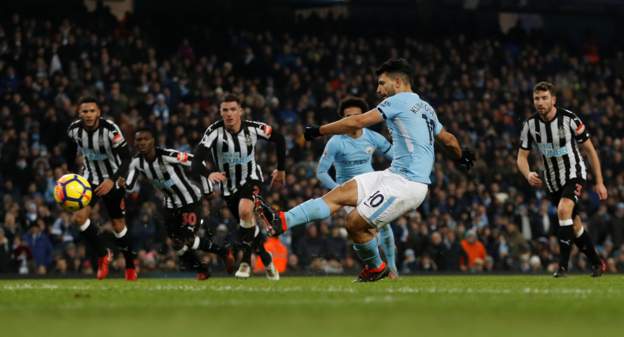 Sergio Aguero’s hat-trick gave Manchester City the win over Newcastle United and restored their 12-point lead at the top of the Premier League.

Aguero’s 11th City hat-trick, and his second of the season, gave his team the three points after second-placed Manchester United had beaten Burnley 1-0 earlier on Saturday, BBC reports.

The Argentina striker claimed City’s first goal when he got the faintest of touches to head in from Kevin de Bruyne’s goal-bound strike, before he converted a penalty after Javier Manquillo had tripped Raheem Sterling.

Jacob Murphy pulled one back with a chipped finish over Ederson, but Aguero powerfully finished after Leroy Sane’s jinking run to seal the victory.

It was a return to winning ways for Pep Guardiola’s side after they had suffered their first league defeat of the season at Liverpool on Sunday.