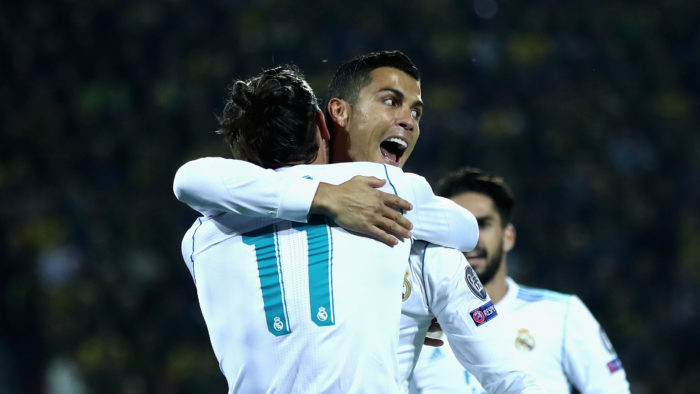 Ronaldo and Bale celebrate their victory

Gareth Bale and Cristiano Ronaldo both scored twice as Real Madrid won a league match for the first time since 9 December with a thumping win over Deportivo La Coruna.

Adrian Lopez tapped in the opener for Deportivo, but Nacho soon levelled with a clinical strike.

Bale curled in a superb second for Real before making it 3-1 with a header.

Luka Modric struck from distance, and a Ronaldo double and another Nacho goal completed the scoring.

BBC reports that the victory moved Real back into the top four but they are 16 points behind leaders Barcelona, who play Real Betis at 19:45 GMT.

Real’s recent patchy form – they had won only two of their previous six matches – coincided with Ronaldo’s struggles in front of goal.

The usually prolific striker had scored just four league goals in 16 appearances prior to this game, his worst return at that stage of a season for Real.

He looked to be lacking in confidence when he shot wide from close range midway through the second half against Deportivo, and appeared to be set for a fourth league game without scoring.

However, Casemiro provided the perfect cross for the Portugal international late on, and he coolly volleyed home before adding a diving header.

Ronaldo’s second came at a cost. He suffered a cut next to his eye, prompting him to use a phone as a mirror to check the extent of the injury.