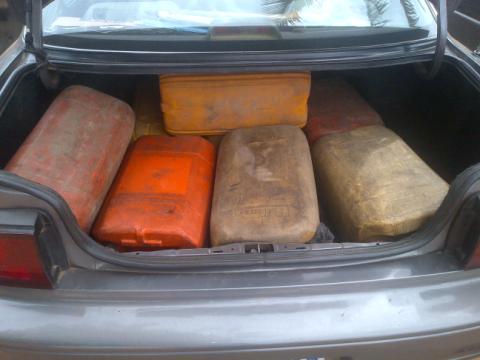 The statement reported the Area Controller, Mr Mohammed Aliyu, as saying this on Monday in Badagry, Lagos State.

Aliyu said the seizures were made at the Pashi Yekeme Community in Owode, Badagry.

According to him, the products were seized by officers of the anti bunkering unit while the they were being smuggled through the creeks.

“Our operational norm doesn’t allow trucks and tankers of petroleum products to cross the Nigeria’s territory, either through the Seme main border or its Owode Apa outstation.

“The Owode Apa station is synonymous to every approved border post and it’s manned by all government security agencies.

“Trucks are strictly monitored and documents are properly cross checked to ensure that they are discharged to the approved filling station.

“Officers of the anti bunkering unit are on ground to ensure that smuggled products through illegal routes are apprehended and seized,” he said.

Aliyu said no arrests were made as the suspects fled on sighting the officials of customs.

He advised the public to desist from smuggling and embrace legitimate trade.

“We are well equipped to tackle smuggling and we advise the public to desist from such illegal act or be ready to face the law,” he said.