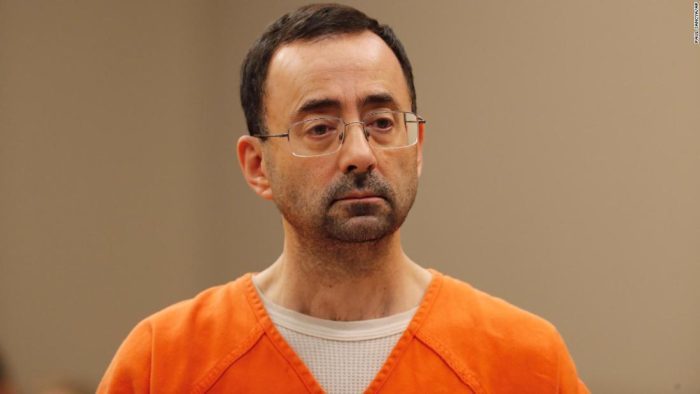 The disgraced long-time USA Gymnastics team doctor Larry Nassar was sentenced on Wednesday to up to 175 years in prison for molesting young female gymnasts, following days of wrenching testimony in a Michigan courtroom from about 160 of his victims, including Olympic gold medalists.

“I just signed your death warrant,” Ingham County Circuit Court Judge, Rosemarie Aquilina told Nassar in imposing the penalty, after delivering a searing rebuke of his years of abuse.

“It is my honor and privilege to sentence you because you do not deserve to walk outside of a prison ever again.”

Some victims dabbed their eyes after Aquilina spoke, although the audience obeyed the judge’s instruction to remain quiet following her pronouncement.

Nassar, 54, pleaded guilty in November to seven counts of first-degree sex assault in Ingham County, as well as three additional charges in Eaton County, where he will be sentenced next week. He is already serving a 60-year sentence in federal prison for child pornography convictions.

Before the sentence was announced, Nassar apologized to his victims, telling them, “I will carry your words with me for the rest of my days.”

But Aquilina angrily dismissed his statement as insincere, reading aloud from a letter Nassar wrote to her in which he claimed he was a “good doctor” who was “manipulated” into pleading guilty, drawing gasps from the courtroom. Yahoo News reports.