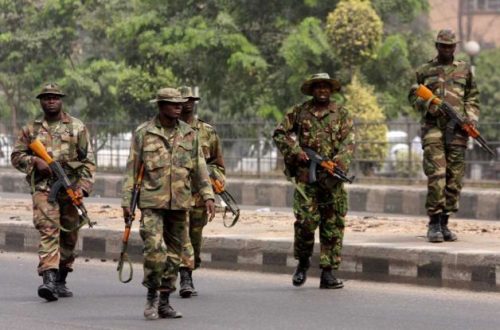 The Nigerian Army has launched a military operation at at Toru-Ndoro community in Ekeremor Local Government Area, Bayelsa State, to fish out those who beheaded a soldier in the area.

A security source disclosed that four soldiers were killed in the bloody clash between militants and soldiers.

Trouble started in the community following the beheading of a soldier.

The Joint Task Force (JTF), Operation Delta Safe subsequently launched a manhunt in the area with a mandate to arrest the militants behind the dastardly act.

The Ijaw Youths Council and Bayelsa government had accused troops of violence and razing houses of innocent residents in the area.

Four of the soldiers who are in the operation were said to have been killed in a shootout with the militants.

The Commander of JTF Rear Admiral Suleiman Apochi, has deployed more troops as reinforcement in the community.