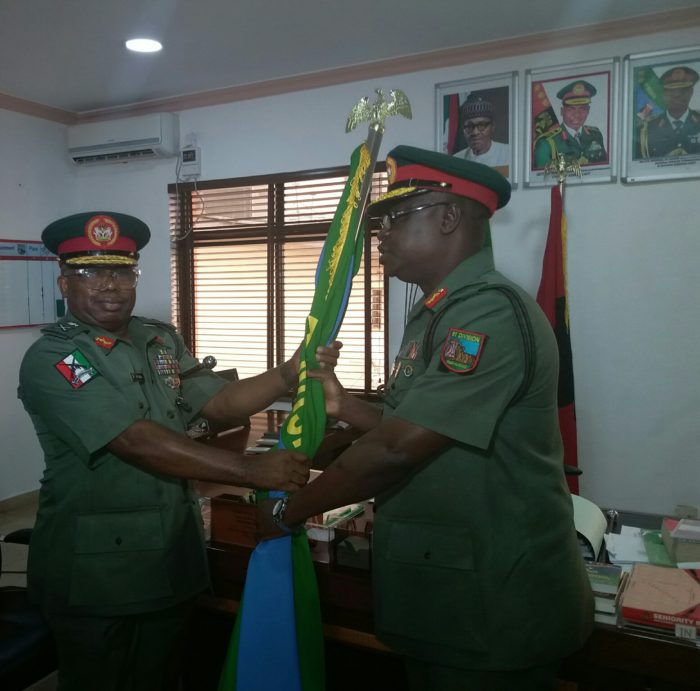 Maj.-Gen. Enebong Udoh on Friday formally took over as the General Officer Commanding (GOC) 81 Division of the Nigerian Army.

At a brief ceremony held at the Division’s Headquarters in Victoria Island, Lagos, Udoh’s predecessor, Maj.-Gen. Peter Dauke, handed over the division’s flag to the new GOC after signing the handing and taking over notes.

The highlight of the occasion was the inspection of the quarter guard where the old flag was lowered and the new one hoisted.

In his remarks, the outgoing GOC thanked President Muhammadu Buhari and the Chief of Army Staff, Lt.-Gen. Tukur Buratai, for the opportunity given to him to serve in the division.

“I had an interesting time working with the commanders, staff and officers of the division.

“I give God the glory for the peaceful environment within my seven-month stay.

“We overcome every challenge that crossed our path and I enjoin everyone to cooperate with the new GOC,” he said.

Earlier, the new GOC said he would do everything in his powers to improve on what his predecessor did.

Until his posting to 81 Division, Udoh was the GOC 6 Division of the Nigerian Army.

The outgoing GOC is now the Deputy Commandant at the National Defence College, Abuja.