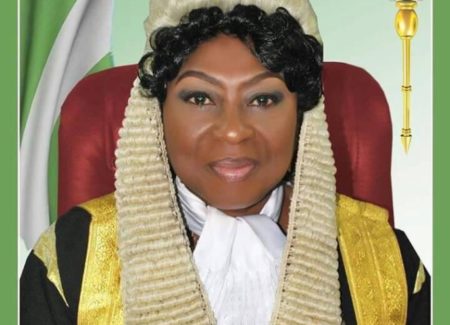 The Edo House of Assembly on Monday lifted the suspension on the impeached former Deputy Speaker, Elizabeth Ativie.

Ativie is the member representing Uhumwode constituency on the platform of APC.

The resolution of the House to lift the suspension followed the recommendation of an ad-hoc committee headed by the Deputy Speaker, Victor Edoror

Edoror (APC-Esan Central) had moved the motion for the house to dissolve into the committee of the whole to consider the report of the committee.

Edoror explained that Ativie had appeared before the committee and had also returned the four vehicles in her possession, adding that she cooperated with the committee on all issues raised.

He listed the vehicles to include one Lexus Jeep, one Prado Jeep and two Hilux vans.

The committee, therefore, recommended that the suspension order placed on Ativie be lifted since she had returned all official vehicles in her possession.

The House adopted the committee ‘s recommendation and the Speaker, Kabiru Adjoto, then lifted the suspension order

The house had on Aug. 14, 2017, impeached the former Speaker, Justin Okonoboh, Ativie and the Majority Leader, Foly Ogedengbe, for alleged gross misconduct and abuse of office.

Ativie was thereafter suspended following her refusal to return all official vehicles attached to the Office of the Deputy Speaker.