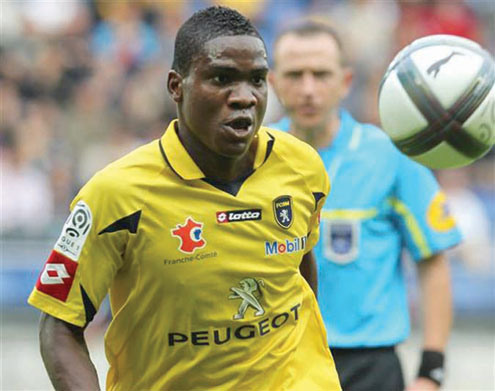 Super Eagles player Brown Ideye has signed for Málaga CF on loan, joining the Spanish club for the rest of the season from Chinese outfit Tianjin Teda.

The club, in a statement on its website, www.malagacf.com, said the striker successfully passed the relevant medical examination at Vithas Salud Rincón Medical Center Rosaleda.

Ideye, born in Nigeria on Oct. 10 of 1988, is a powerful striker and goal-scorer with extensive experience in various European leagues.

After beginning his career in his country of origin in 2006, a year later he landed in Switzerland to join the ranks of Neuchatel Xamax where he was till 2009.

Ideye was at Ukrainian side Dynamo Kyiv from 2011 to 2014), coincidentally scoring two goals in a friendly against Málaga CF in the 2013/2014 season.

After joining West Bromwich Albion in the English Premier League from 2014 to 2015, and Greek outfit Olympiacos from 2015 to 2017, his tour of Europe ended.

His remarkable goal-scoring stats sparked the attention of the emerging Chinese Super League, and he signed for Tianjin Teda in 2017.

On his twitter handle @officialideye, he reacted to the development by saying he was happy to have signed for Malaga FC and thanked the management and fans of his Chinese club.

“Now onto a new chapter of La Liga, big thanks to everyone who made this possible. I am grateful and can’t wait to get started.’’