Lagos' a renown Sub-National Economies In The World - CPC 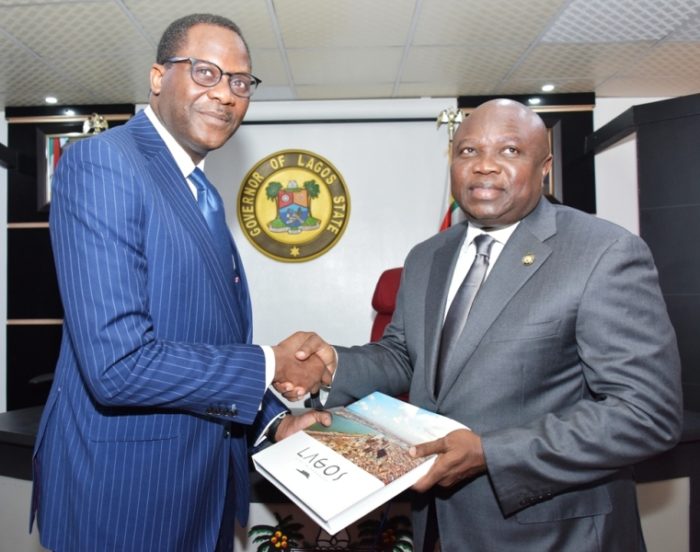 Irukera made the submission when he led a delegation of the CPC, top officials from the Nigerian Association of Chambers of Commerce, Industry, Mines and Agriculture (NACCIMA) and United Nations Industrial Development Organisation (UNIDO) on a courtesy visit to Governor Akinwunmi Ambode at the Lagos House in Alausa, Ikeja.

The CPC boss, while noting that Lagos was strategic to Nigeria’s growth and development, said the State had become a model for other States in Nigeria and a force to reckon with in the global space.

Irukera, who said they were in Lagos to flag off advocacy on the National Quality Infrastructure Project, noted that the choice of Lagos was due to its strategic positioning in terms of housing the bulk of production and importation activities in Nigeria and also for the fact that majority of complaints received by the CPC comes from consumers in the State.

He said the National Quality Infrastructure Project was a partnership between the Federal Government and UNIDO to sensitise citizens about demanding quality and also ensuring the manufacturers of goods and services respect appropriate quality standards.

While commending the State Government for setting up the Consumer Protection Agency (CPA), Irukera lauded the Governor for providing quality leadership which according to him has raised the bar of governance in Nigeria.

“The fact that we recognise your record as an individual and in the period that you have led Lagos State demonstrates that beyond recognizing what the issues are, you are right on board and working on the issues.

“While people might excuse the proscription of their rights by their government, they certainly will never excuse a government that cannot protect it from other private citizens and you have demonstrated that you recognise that as an important thing and you have taken a fundamental step to that,” Irukera said.

Responding, Governor Ambode charged the CPC to look beyond the rights of people to have quality products and services and beam its searchlight on other key sectors which have direct impact on the standard of living of Nigerians.

“The kind of services that we provide in terms of transportation; is it the kind of thing that our people should have, should we just label them and say that is what their own lifestyle should be? These are things that we should find some platform to talk about,” Governor Ambode said.

While pledging support for the ‘National Quality Infrastructure Project’ the Governor said the campaign would ensure that the right of Lagosians and Nigerians in general to quality goods and services is guaranteed, adding that concerted efforts must continue to be done by all stakeholders to ensure that Nigerians are only exposed to the best.

He said his administration had already queued behind the advocacy with the setting up of the Lagos State Consumer Protection Agency (CPA), chaired by consumer rights advocate and lawyer, Mrs Olufunmilola Falana.

“I am very excited that the Consumer Protection Council is on this advocacy. We are excited also that barely three weeks ago, we were also able to set up our own agency and with a charge that they must commence operation immediately to be able to do that missing part between the ordinary Nigerian citizen and the product of goods and services in this country.

Governor Ambode had earlier in his opening remarks said he had initially wanted to cancel the visit due to the demise of his Special Adviser on Commerce, Industry and Cooperatives, Mr. Deji Tinubu last week Thursday who ought to have coordinated the visit by the CPC delegation.

“We should have cancelled this courtesy visit but again you know the business of government will always go on because we had actually agreed about two weeks earlier that we would receive the Consumer Protection Council. As at this morning, it should have been Deji that should have been sitting beside me here, because we are yet to have a Commissioner for Commerce. This was one of the last assignment that he was actually doing on Thursday to clear this visit. So, in his memory, we had to ensure that we do this courtesy visit. That’s how government business is. I don’t want to start Monday on a solemn note, so I do this courtesy visit with all sincerity and all sense of responsibility”, Governor said.