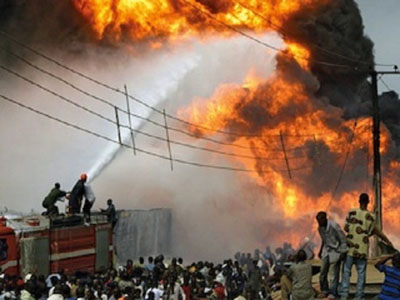 Malam Abdulmumini Shuaibu, the Officer in-Charge of the Fire Service Sub Unit in the local council made this known in Daura on Tuesday.

He said it took his men six hours to quench the fire which started at about 8:47 am, adding that the cause of the incident was yet to be established.

Shuaibu said the fire destroyed 10 locally made grains store, five cows, 25 goats, 30 chickens and a residential room, but no loss of life was recorded.

He warned the people of the village against careless handling of fire and other inflammable substances.

The fire officer said that they would intensify enlightenment campaign in the local government on preventive measures against fire outbreak.

Malam Lawal Daura, Head of the Council Veterinary Unit, said that 31 animals which include, five cows and 26 goats are currently receiving treatment in his unit as a result of the burns they sustained from the inferno.

Alhaji Lawal Kado, the acting Chairman of the council had sympathized with the victims, urging them to regard the incident as an act of God.

He said the council has forwarded report of the incident to the State Emergency Management Agency and the Ministry for Local Government and Chieftaincy Affairs for prompt intervention.