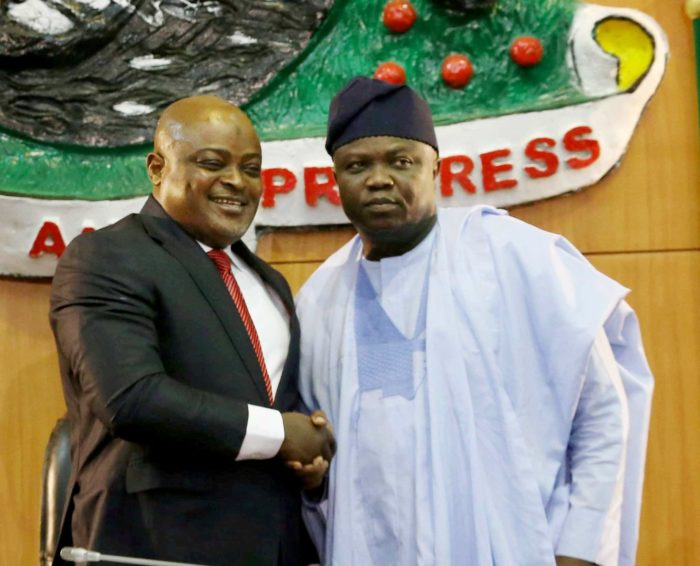 Lagos State Governor, Mr. Akinwunmi Ambode (right), in a handshake with the Speaker, Lagos House of Assembly, Rt. Hon. Mudashiru Obasa during the presentation of the Y2018 Budget Estimates to the House, at the Assembly Complex, Alausa, Ikeja, on Monday.

The Lagos State House of Assembly on Tuesday passed the 2018 budget of N1.046 trillion presented to it last December by Governor Akinwunmi Ambode.

Speaker of the House, Mudashiru Obasa said N699 billion was appropriated for Capital Expenditure and N347 billion for Recurrent expenditure.

The Assembly endorsed the appropriation bill after Obasa conducted a voice vote on each of the sectoral allocations for Ministries, Departments and Agencies, MDAs.

One of the lawmakers moved a motion for the adoption of the report and recommendation of the Gbalahan Yishawu led Ad-hoc Committee on the 2018 Appropriation bill and it was seconded by another lawmaker.

Presenting the report, Yishawu accused some MDAs of improper planning and presentation of their budgets.

A lawmaker, Fatai Mojeed wondered why some MDAs recorded increase in salary expenditure when there was no increase in the number of people employed.