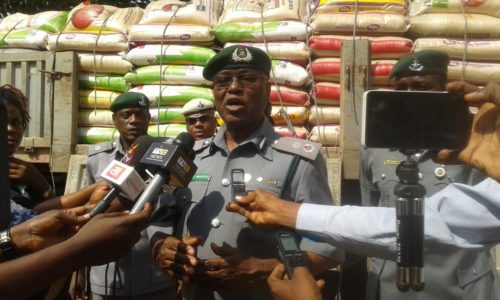 The Federal Government has approved N1.12billion for the purchase of 50 operational “anti-rice smuggling” vehicles to check the persistent smuggling of rice into the country, the Minister of Finance, Mrs Kemi Adeosun has disclosed

The minister spoke to State House correspondents alongside Mr Babatunde Fashola, the Minister of Power, Works and Housing and the Minister of Mines and Steel Development, Mr Kayode Fayemi on the outcome of the meeting of the Federal Executive Council (FEC).

The meeting was presided over by President Muhammadu Buhari at the Presidential Villa, Abuja on Wednesday.

Adeosun stated that the procurement of the operational vehicles, which would be deployed to the anti-rice smuggling Task Force, was also meant to stop custom officials from invading markets to seize smuggled rice and harassing traders.

“The second approval was for the purchase of 50 vehicles and they are going to be deployed for an anti-rice smuggling Task Force that is being put together which Customs will be leading.

“As you know, our efforts to become major rice producers had resulted to the revival of local rice growers. But what we found was although that there was 90 per cent reduction in the official import of rice, smuggling has increased and of course our borders are very porous.

“We believe that to protect our farmers and to protect the investments that the people had made and gone back to the farm government must really act to stem the tide of illegal rice importation via smuggling.

“We felt that it is important we don’t want Customs going to seize rice in the markets. Customs should actually act to stop rice coming in at the border posts and Customs indicated that they need additional vehicles, additional resources as well as of course other more information-driven strategies to stop it,’’ she said.

According to her, the multi-agency task force on anti-rice smuggling which has been in operation since July 2017 had been gathering information on how to check smuggling of rice into the country.

The minister also disclosed that the council approved N1.2 billion to acquire 81 units of two-bedroom flat to serve as Nigeria customs’ barracks in Abuja.

She expressed the hope that the barracks would go a long way in addressing the accommodation challenges being experienced by the custom officials.

On his part, the Minister of Power, Works and Housing, who gave an overview of the activities of his ministry since Nov. 2015, said the ministry obtained 66 approvals from the Federal Executive Council in the period under review.

He said the approvals covered power, road constructions and housing projects particularly the Federal Secretariat across the country.

“It also covers federal secretariat in states like Gombe, Zamfara, Bayelsa, Ekiti and of course the Zik Mausoleum in Anambra.

“We reported about the state of the Pilot housing projects that is also going on in 33 states.

“Our report also dealt with the short, medium and long term impact of these approvals vis-a-vis the budget implementation for 2016 and 2017, and our report showed that the implementation of these projects had led to 69,736 jobs.

“And most of these are jobs largely that were lost in the construction industry before the advent of this administration. You’ll recall that in my maiden brief to you as minister one of our targets was to recover those lost jobs.

“So, this memorandum and implementation of the budget has helped in some ways to achieve this,’’ he said.

The Minister of Mines and Steel Development, Mr Kayode Fayemi, who also spoke on the various achievements and challenges of the ministry, disclosed that the ministry received 10 approvals from FEC since Nov. 2015.

According to him, the approvals included the purchase of vehicles for Federal Mining Officers and the establishment of a task force to tackle illegal mining operations across the country.(