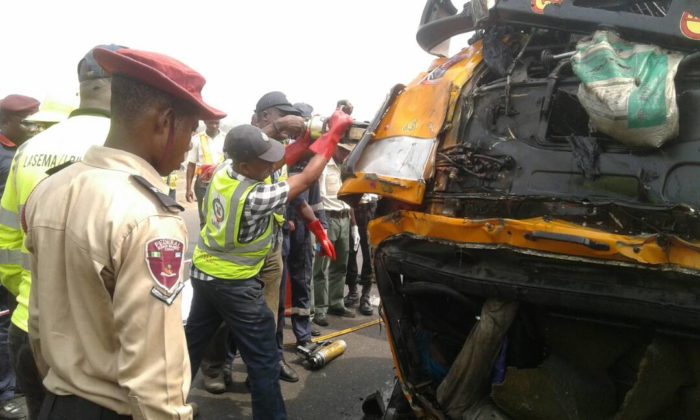 Rescue operation at the scene of an accident

A three-year old baby and three adults have died after the head of a containerised truck detached from its body and rammed into a motorcycle with the rider and two passengers on Kara Bridge, Lagos-Ibadan Expressway on Wednesday.

According to the Lagos State Emergency Management Agency, LASEMA, it received a distress call through the emergency toll free number 112/767 at about 8.45 a.m concerning an accident on Kara Bridge, Lagos Ibadan Express Way.

General Manager, LASEMA, Adesina Tiamiyu said on arrival at the scene, the LASEMA Response Team gathered that a 20ft containerized truck with unknown plate number was involved in the accident.

“Further investigation revealed that the head of the containerized truck detached from it body while on motion inward Kara bridge and rammed into a motorcycle with the rider and two passengers while the head of the truck plunged into Isheri Olofi River.

“Unfortunately, a three-year old boy on the motorcycle lost his life while his mother had leg fracture and they have been moved to the hospital by the FRSC,” he said.

Tiamiyu added that the head of the truck that plunged into the river was however recovered from the river with the aid of the heavy duty equipment Crane with support from the local divers.

He disclosed that three other dead bodies were subsequently extricated and recovered from the truck head and handed over to the FRSC officials who moved them down to the morgue.

The General Manager said that proper investigation would be conducted on the incident, while advising motorist, especially articulated truck drivers to always drive within speed limit and ensure they adhered with road safety regulations.