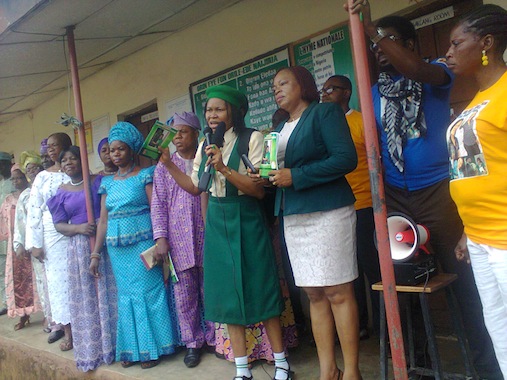 A cross section of teachers

The Nigeria Union of Teachers (NUT), on Thursday threatened to embark on strike if defaulting state governors failed to clear salary arrears of its members.

The national president of the union, Mr Michael Olukoya, said this in Abuja on Thursday, at the solemn assembly organised by the union.

“The leadership of the NUT wishes to again express our displeasure over continued nonpayment of salaries and allowances of primary and secondary school teachers in several states across the country.

“In spite of our earlier call on all defaulting states to pay up the backlogs of salaries and allowances owed teachers to galvanise effective academic activities in our schools.

“We shall embark on strike on two things and on two occasions, one is on non-payment of salaries and two is the decay in the laboratories in schools.

“Others are Nasarawa: primary owed 26 months (half salaries) and Oyo owes one month in both its primary and secondary schools.

“We call on the affected state governments to clear the salary arrears and ensure regular payment of the salaries of teachers without further delay.’’

Olukoya said, though Benue owes teachers’ arrears, the union would not allow its members in the state to join the upcoming industrial action.

“So the needful will be done to our members in the state, we need to identify with them as a result of that.

“They will not join the nationwide strike until their case is debated on at the National level.

The president also condemned the recent sack of over 21,000 primary school teachers by Kaduna State Government.

He said the sack was done without recourse to the Teachers Registration Council of Nigeria, an agency mandated to regulate and control teaching profession in the country.

“ We hereby express our dismay over this show of impunity and lack of respect for the rule of law.

“We call on the government of Kaduna State to rescind its decision and seek closer ties with relevant bodies and stakeholders and work towards amicable resolution of the issues,’’ he said.