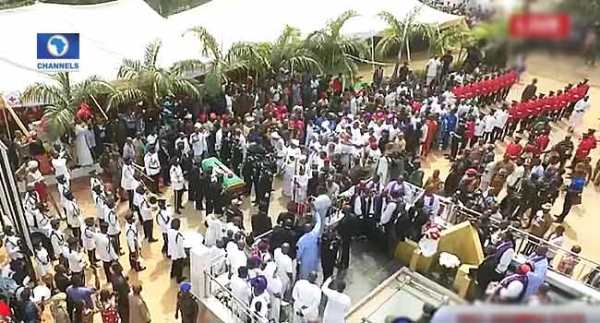 Nigeria’s former Vice President, Dr. Alex Ekwueme, was laid to rest on Friday at his hometown, Oko in Anambra state after a week-long burial rites.

Top government officials, close friends and family members gathered to pay their lasts respect to the 85-year-old elder statesmen who died in November 2017.

According to the News Agency of Nigeria, some of those present to witness the final moments were Vice President Yemi Osinbajo and former President Goodluck Jonathan and his wife, Patience.

The former Vice President whose remains returned to Nigeria on Monday, died at a hospital in London United Kingdom on November 19, 2017, following a respiratory illness.

Born October 21, 1932, Ekwueme started his career as an architect after earning a bachelor’s degree in architecture and city planning, as an awardee of the Fulbright Scholarship, from the University of Washington in the United States.

He later obtained a master’s degree in urban planning and also earned degrees in sociology, history, philosophy and law from the University of London.

Furthering his education, he obtained a PhD in Architecture from the University of Strathclyde, before gaining the BL (honours) degree from the Nigerian Law School.

In 1979, Ekwueme became Nigeria’s first Vice President, serving as deputy to Shehu Shagari, until 1983 when they were ousted in a coup.

Over the years, he played several roles domestically and internationally, cementing his status as a statesman.

In the course of the week, tributes poured in from many prominent Nigerians and top government officials who shared experiences from their relationship with him and described him as a rare gem who will be greatly missed.

As he is finally laid to rest today, the hope of many is that his legacies live on and Nigeria continues to uphold the virtues of unity and integrity and selfless service as he had always practised.

The Federal Government has renamed the Federal University in Ebonyi State as Alex Ekwueme University.

The university is located in Ndufu Alike Ikwo in Ebonyi.

Vice-President Yemi Osinbajo announced the honour today at the funeral rites for the former vice-president at the St John of the Divine Church, Oko Anambra state.

The ceremony was attended by former president Goodluck Jonathan and his wife, Patience.

Osinbajo said that Ekwueme, who was Nigeria’s vice-president between October 1979 and December 1983, was being immortalised for his selfless service, integrity and contributions to national development.

He described Ekwueme as a true Nigerian icon and statesman whose life and times were worthy of celebration.

He said he wasn’t only being remembered as an accomplished scholar, or for his architectural prowess or for having occupied high public offices but because he practiced eternal principles that set men and women apart from their peers whether they were poor or rich.

Osinbajo said the deceased showed bravery in the face of terror and set an excellent example of loyalty as a vice president.

“Ekwueme was a man of principles, of personal sacrifice for others and service to those who cannot offer him reward,” he said.