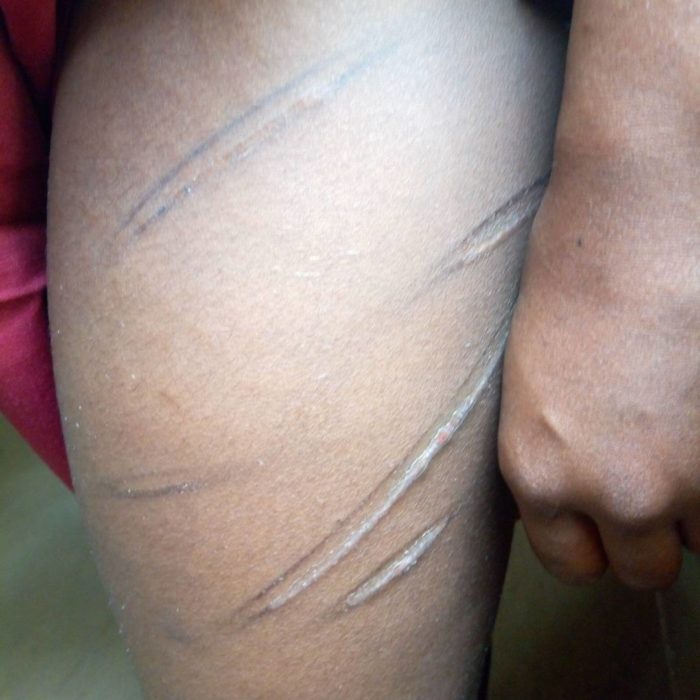 Deep scars on the girls thigh

Officials of the Lagos State Ministry of Youth and Social Development have rescued a 14-year old girl who is being tortured, with deep wounds inflicted on her body, from her guardian in Mushin area of Lagos, Southwest Nigeria.

The victim, Unwana Emmanuel, had been under severe torture for 16 months since she started living with her guardian, simply known as Mummy Chidera.

Her rescue came into being following a text message sent by an anonymous person to the Child Protection Unit of the Ministry, stating the predicament of the 14-year old girl battered with scars all over her body from unrepentant guardian for 16 months.

Unwana, who resides at 6, Alamu Close, Surulere since July 2016 relocated to Lagos from Akwa Ibom due to her parent’s inability to provide her education, leaving her with Mummy Chidera who had since then continuously abused her physical and at some times delayed her going to school.

The enforcement officers of the Ministry, upon their arrival at the residence of the victim at Mushin/Isolo Local Government, learnt that the girl was in school while the officers got to the school, interrogated her to validate the report.

She was immediately taken to the Juvenile Welfare Centre, while Mummy Chidera had been charged to court.

Speaking on the matter, Commissioner for Youth and Social Development, Agboola Dabiri said government would not tolerate such action and would not hesitate to hand culprits over to the law.

According to him, “children have their right; they have right to education, life, shelter and good life; their interest come first whether under the influence of parents or guardians. The law is very clear in section 1, Lagos State Child Protection law. Lagos State will not take it likely, be it parents, be it guardian, they don’t have the right to abuse any child under their care. Lagos State will not tolerate it.”

On the state of Unwana, he said “We have the child in our custody. The next line of action is court. Let them go to court and face what the law has to offer, let them give reasons for their action and let justice prevail.”

He, however, advised parents and guardians to put thoughts first before action, as some actions could lead to death or injury, saying that the government would take no excuses for such action and would leave the perpetrator to face the consequences of such actions.

“Children are gift from God. No one has the right to maltreat children. We are calling on parents to beware of the way they treat their children. There is need for carefulness. Think of your actions, if not, you will bear the consequence,” he said.

Agboola, who, warned youths to shun drug abuse and cultism used the medium to warn parents and guardians to desist from engaging their children in hawking during school hours.

The Commissioner said the ministry would begin sensitizing families, schools, children, Community Development Associations, CDAs and youths through collaboration with celebrities in entertainment industry and role models in corporate world.