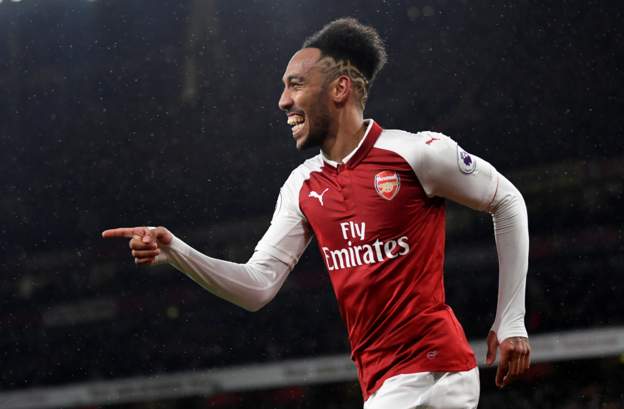 Aaron Ramsey scored a first career hat-trick and Pierre-Emerick Aubameyang netted on his debut as Arsenal eased past Everton 5-1 at the Emirates on Saturday, Sky Sports reports.

Ramsey scored twice in the opening 20 minutes (6,19), either side of a headed goal from Laurent Koscielny (14).

Arsenal’s club-record signing Aubameyang made it 4-0 with a clever chipped finish in the 37th minute, even though he was clearly in an offside position.

Everton did improve in the second half and managed to pull a goal back through substitute Dominic Calvert-Lewin (64), but the hosts had the final say as Ramsey completed his hat-trick in the 74th minute, with Henrikh Mkhitaryan providing his third assist of the game.

The result was the perfect response for Arsenal after their midweek defeat to Swansea, and belied comments from Sam Allardyce on Friday that the Gunners were “defensively weak”.

Instead it was Everton who struggled defensively, particularly in the first half when their back three – which included new signing Eliaquim Mangala – was regularly exposed and caught out of position.

Ramsey opened the scoring in the sixth minute, finishing from close range after Mkhitaryan crossed into the middle. Mkhitaryan then shot narrowly wide from 25 yards before Koscielny stooped to head in from a corner.

Ramsey was given too much space to fire in a deflected shot in the 19th minute as Arsenal continued to dominate.

Theo Walcott was denied a goal on his return to the Emirates by a brilliant block from Mustafi before Aubameyang was played through on goal but saw his shot saved by Jordan Pickford.

Aubameyang did finish a few minutes later, cutely chipping over the goalkeeper from Mkhitaryan’s pass, although he was a few yards offside.

Nacho Monreal hit the bar from a corner before half-time and saw a shot deflected wide as Arsenal pressed for more goals.

The Gunners’ level did drop after the break, though, and Oumar Niasse hit the post from Walcott’s excellent cross before Calvert-Lewin headed in to make it 4-1 in the 64th minute.

But, even though Petr Cech was forced off with injury, Arsenal managed to have the final say as Mkhitaryan won the ball on the right side and crossed for Ramsey to sweep home and complete his hat-trick.