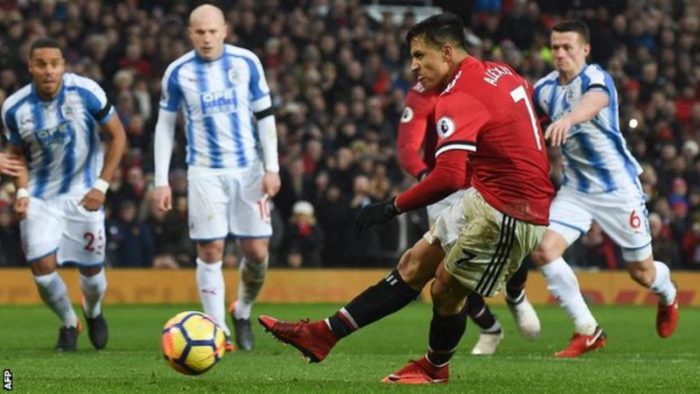 Alexis Sanchez scored his first goal for Manchester United as they comfortably beat Huddersfield to send the visitors into the Premier League’s relegation zone.

After an uneventful first half, Romelu Lukaku gave United the lead on 55 minutes with a close-range volley.

BBC reports that Sanchez was then fouled by Huddersfield defender Michael Hefele to win a penalty and the Chilean, a January signing from Arsenal, stepped up to take the spot-kick.

The forward saw his low shot saved by Jonas Lossl, but made no mistake with the rebound to double United’s lead on his home debut.

It was an emotional day at Old Trafford as United commemorated the 60th anniversary of the Munich air disaster with a minute’s silence before kick-off.

With Premier League leaders Manchester City drawing with Burnley in the early kick-off, second-placed United narrowed the gap to 13 points.

But it was a fifth successive league defeat for Huddersfield, who are without a win in eight league games and now sit 19th.