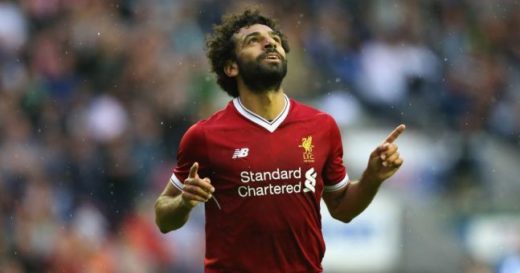 Harry Kane’s penalty – converted with virtually the last kick of an enthralling encounter – gave Tottenham a vital point at Anfield after Mohamed Salah’s brilliant stoppage-time strike looked to have given Liverpool victory.

Liverpool had only seconds to survive when referee Jon Moss pointed to the spot after Virgil van Dijk collided with Eric Lamela – allowing Kane, who had missed an earlier penalty, to score his 100th Premier League goal and leave Anfield enraged.

BBC reports that Salah’s third-minute goal, scored after he intercepted Eric Dier’s poor back pass, gave Liverpool a lead they held until 10 minutes from time when Spurs substitute Victor Wanyama lashed keeper Loris Karius’ punched clearance back into the top corner from 25 yards.

In a dramatic finale, Karius saved Kane’s penalty after he brought down the striker, paving the way for Salah to weave his way into the area before lifting a finish over Spurs keeper Hugo Lloris at the start of five minutes of stoppage time.

And after Moss awarded Kane a second opportunity from the spot, the England international placed his penalty into the bottom-right corner.

It was a fitting end to an Anfield thriller and a result which will bring more satisfaction to Spurs as defeat would have left them five points adrift of Liverpool in the race for a place in next season’s Champions League.

Liverpool remain third in the Premier League table, two points ahead of Tottenham in fifth.