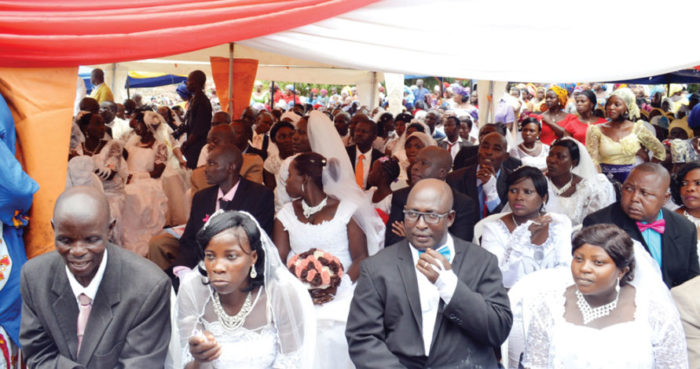 Rev. Fr. Lawrence Soja-Anyembugu, a Parish Priest in charge of St Sylvester Catholic Church, New Nyanya and Karu in Nasarawa state, has sponsored the marriage of 53 couples in the state.

Soja-Anyembugu announced this in Karu on Sunday after the marriage matrimony of the couples in his church.

He said that the gesture was extended to the people, to enable them to receive the sacrament of holy matrimony.

According to him, the step will also enable those who did not marry in the church to receive the sacrament of holy matrimony to get more blessings and favour from God and in the interest of peace.

The priest called on the couple to continue to be patient, tolerate one another for them to have a peaceful home, adding that marriage was all about endurance and patience.

“I have decided to sponsor this church marriage for 53 couples who indicated their interest to have their marriage blessed in the church so as to give them a sense of belonging as well as to enable them to receive the sacrament of the holy matrimony.

“The importance of church marriage cannot be over-emphasised as it will promote peace among the couples and also will enable them to get more blessings and God’s favour.”

Soja-Anyembugu called on the couples and other Nigerians to live exemplary lives by inculcating moral values in their children in the interest of peace and for the overall development of the country.

He also advised Christians and other Nigerians against engaging in unruly behaviours and other sharp practices in the interest of peace and also to inherit the kingdom of heaven.

He added that no religion preached violence and hatred but all religion preached peace, unity and forgiveness, hence the need for all Christians in Nigeria to live a life worthy of emulation for the overall development of the country.

The Parish priest quoted many verses in the bible that preached love, affection, adding that the hellfire awaited those that refused to seek for forgiveness and shun evil acts while on earth.

“Without peace, no nation can experience meaningful development and no nation or society can develop in an atmosphere of rancour and confusion

He gave the need to show love as well as live in peace and unity with one another.

“It is only when we forgive each other and shun evil acts that there will be permanent peace.

“I urge all of us to continue to pray for the peaceful co-existence among the people of the diverse ethnic, religious and political groups in the country,” he said.

The cleric urged Nigerians to continue to pray for leaders in order to overcome the challenges facing humanity and the society at large.

Soja-Ayembugu called on the members of the church and Nigerians to be law abiding and respect constituted authorities and engage in activities that would promote peace and unity in the country.

The parish priest restated his commitment to continue to initiate good policies and programmes that would promote peace and unity in the society.