Ambode warns New Commissioners: I deserve nothing from you but the best 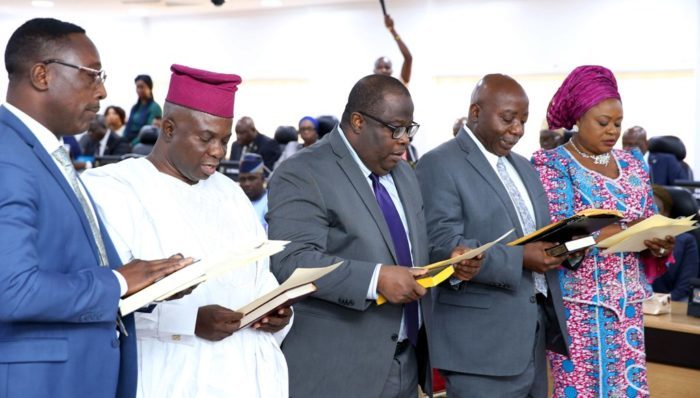 Lagos State Governor, Akinwunmi Ambode on Monday inaugurated newly appointed commissioners and special advisers, with a charge that he deserved nothing from them but the best of service for faster development of the state.

“As you settle down to your new assignments, I demand nothing but the best from you. Your immediate task as you hit the ground running is to quickly bring yourself up to speed with the mandate of your MDA and key into the immediate priority for this year which is the completion of all ongoing projects. This however does not preclude the initiation of new projects that are considered highly essential and critical to the general well-being of our people,” he said.

According to Ambode, “You are joining a winning team of committed professionals and politicians who have been working round the clock for the past 32 months to make Lagos functional, efficient and a haven for business, tourism, entertainment and sports.

“This is not to say that we have arrived at our desired destination. There is still a lot of work to be done in order to achieve the desired vision of Lagos we all want to see, live and work in. Moving our State forward on the path of sustainable growth requires regular stock taking and injection of new ideas to reinvigorate and re-energize government machinery. This is the thinking behind the appointment of the new members of the State Executive Council whom we have just sworn in today.

“The Executive Council of which you are now members, is the highest policy making body of the State which is also charged with the responsibility of implementing government programmes through the various MDAs. It is my expectation that you will bring to bear, your knowledge, expertise and experience, on the mandate of the Ministries to which you have been assigned and the overall vision of this administration.”

Ambode said one of the approaches of his administration had been to infuse Innovation and creativity into governance, adding that giving the cosmopolitan nature of Lagos State and the peculiar challenges of a mega city, “we cannot afford to rely on the status quo approach to providing solution to new and emerging issues. We must therefore, as a matter of necessity, adopt new methods to achieve greater efficiency and increased productivity.”

He charged them to keep in mind that the greatest asset of this administration was the goodwill of the people which cuts across all segments of the society, saying that his government was committed to sustaining this goodwill by upholding the policy of inclusion and implementing programmes and projects that would positively and directly impact on the livelihood of all the people.

Responding on behalf of the appointees, Oladunjoye thanked Governor Ambode for finding them worthy to be part of a robust administration which, according to her, had been implementing projects and policies in all sectors of the State, assuring that they would key into the vision and mission of government and offer nothing but the best to move Lagos forward.