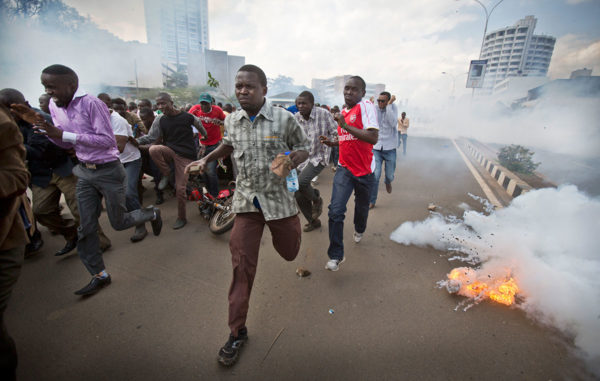 Kenyan police fired teargas on Monday to disperse 100 demonstrators demanding that the government reopen three private television channels it shut down on over their coverage of the opposition.

The activists were trying to march to government offices in central Nairobi when police fired the gas, a Reuters witness said.

The government has ignored a court order issued on Thursday that the stations be allowed to reopen.

They were shut on Tuesday when trying to broadcast live footage of opposition leader Raila Odinga’s symbolic presidential inauguration.

Odinga claims he, not President Uhuru Kenyatta, is the real winner of a presidential election held in August but later nullified by the Supreme Court on procedural grounds.

Kenyatta won the August election, and won the repeat election in October as well after Odinga boycotted it, complaining it would not be fair.

Odinga’s opposition alliance has not yet produced credible evidence to show he won the election, or outlined his next plans.

He failed to show up at a rally on Sunday, leaving his allies to explain they would outline their plan next week.

In addition to shutting down the television stations, the government briefly detained three opposition politicians who took part in Odinga’s symbolic swearing-in ceremony this week.