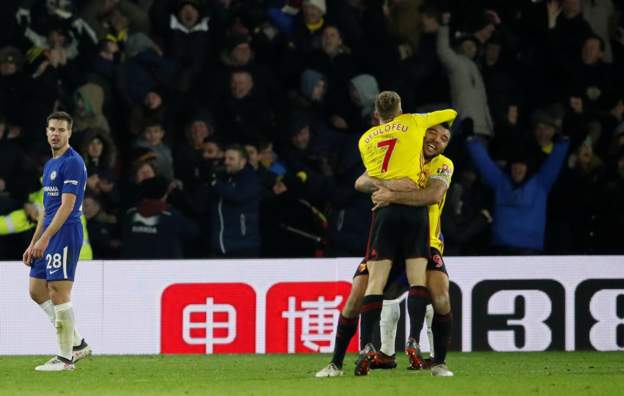 Watford put four goals past a hapless Chelsea on Monday as the Premier league champions displayed a woeful performance.

Watford opened scoring on 42 minutes with a well taken penalty by Deeney after he was fouled by Chelsea keeper.

Chelsea’s Bakayoko was sent off in the 30th minute of the first half and that marked a turning point in the game.

Hazard equalised for Chelsea on 82 minutes, but a poor defending by the visitors saw Watford scoring three goals in seven minutes.

The home team immediately got back into the lead on 84th minute through Janmaat, while Deulofeu added a third goal on 88 minutes and Pereyra, the fourth goal on 91st minute.

Olivier Giroud who came in for injured Pedro had a nightmare debut for Chelsea as the lost scandalously to Watford.