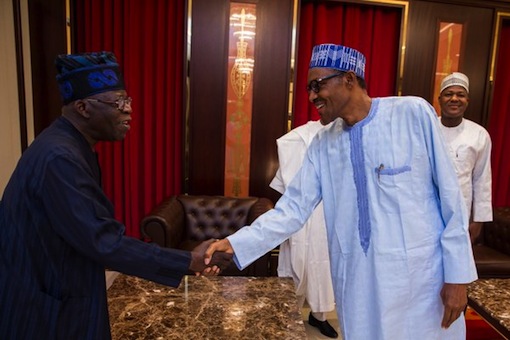 Nigeria’s President, Muhammadu Buhari has mandated the National leader of the All Progressives Congress, APC, to reconcile aggrieved members of the party ahead of the 2019 general elections.

Senior Special Assistant to the President on Media and Publicity, Garba Shehu disclosed on Tuesday in a statement.

He said the move by thee president was part of on-going efforts to improve cohesion within the All Progressives Congress (APC).

According to him, Buhari had designated Asiwaju Bola Ahmed Tinubu to lead the consultation, reconciliation and confidence building efforts among aggrieved party members.

“The assignment will involve resolving disagreements among party members, party leadership and political office holders in some states of the Federation,” he said.

In recent times, there have been squabbles among APC members as some of them felt betrayed and disappointed in the way the affairs of the party was being run, while some, like former Vice President Atiku Abubakar had decamped from the party.