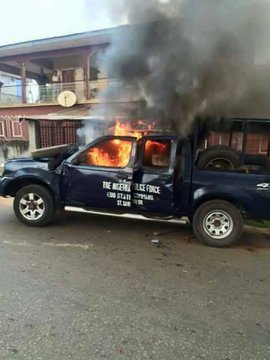 There was pandemonium in Benin, capital of Edo State Tuesday, when an unidentified taxi driver, was killed by a petrol tanker, after he was allegedly pushed on the road by policemen at a check point on the road.

The incident which occurred around 3rd East Circular Road, by Igun Junction, caused traffic logjam on the ever busy Akpakpava road and all other adjourning roads, as all the link roads were blocked with bonfires by angry protesters.

PMNEWS gathered that the police operatives stopped the victim who was said to be with his wife and two children in the car, and demanded for N100 bribe from him. The driver refused and an altercation ensued.

A policeman allegedly pushed him on the road and was crushed by a moving petrol tanker.

Following the death of the unidentified taxi driver, irate youths and drivers mobilised and descended on the policemen who fled, leaving their operational vehicle behind.

One of the policemen was however not so lucky, as he was attacked and pushed into the roadside drainage. 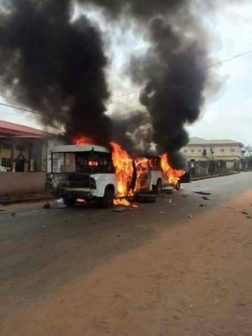 As at the time of filing this report, unconfirmed sources had it that one of the policemen was killed and about four Toyota hilux vans belonging to the police set ablaze by the enraged protesters.

The vehicle of the victim, a black BMW with registration number AFZ 846 HW and the petrol tanker marked FKJ 567 XB, were parked at the scene of the incident.

Calls made to the mobile phones of the State Police Commissioner, Mr. Johnson Babatunde Kokumo and the Command’s spokesman, Chidi Nwabuzor went unanswered.

Also, a text message sent to the Commissioner’s mobile phone was not responded to.