16 State govts. yet to pass `Not-Too-Young to Run Bill’– Group 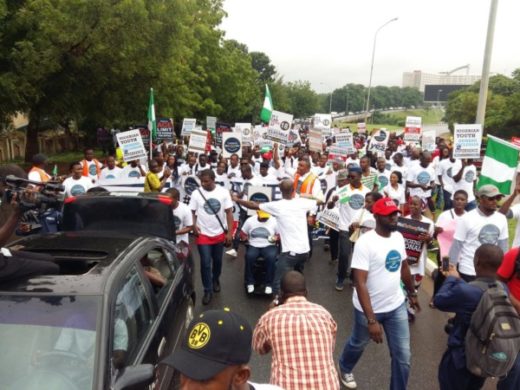 Not Too Young To Run Protest

The “Not Too Young to Run’’ movement, a Civil Society Organisation (CSO) on Wednesday said that 16 states were yet to pass the “Not-Too-Young to Run Bill’’.

Mr Samson Itodo, one of Conveners of the group, made this known while addressing newsmen in Abuja.

According to Itodo, the Not Too Young To Run group is a movement of youths and civil society groups advocating for the reduction of age to run for elective offices.

The he said was to mainstream youths in electoral politics.

“Since the bill was transmitted to the 36 states’ Houses of Assembly along with other constitutional amendment bills, at least 16 states have passed the bill.

“You will recall that in Dec. 2017, the National Assembly transmitted 15 constitutional amendment bills to the states for passage.

“In Jan. 2018, the Kogi State House of Assembly passed it, while in February 2018, the Bauchi ,Jigawa and Ebonyi states also joined in passing the Not-Too- Young To Run bill.’’

Itodo said that the passage of the bill was a demonstration of the states commitment to the tenets of representative democracy.

He said that the movement would like to register its disappointment with the Taraba State House of Assembly for voting against the age reduction bill.

“On Dec.20 2017, 11 members of the House voted against the bill making it impossible for the house to pass the bill.’’

Itodo said that it was unfortunate that majority members of states’ Houses of Assembly voted against the will of the people of Taraba despite assurances of its passage by the entire house.

He also commended the House of Representatives for passing an amendment to Section 85 of the Electoral Act 2010 as amended.

This, he said was to compel political parties to ensure that the position of youth leaders must be occupied by persons between the age of 18 and 35 years.

Itodo said that the amendment was in tandem with the philosophy of Not-Too- Young to Run.

“We urge the National Assembly to expedite action on concluding all electoral and constitutional amendments as the 2019 elections are less than 373 days.

“According to Section 9 (2) of the 1999 Constitution of the Federal Republic of Nigeria (as amended), a constitutional amendment requires approval by at least 24 state Houses of Assembly.

“The Not-Too-Young To Run Bill needs at least eight more states to meet this constitutional threshold.

“The movement uses this opportunity to call on the 19 states’ Houses of Assembly that are yet to pass the bill to emulate their colleagues by voting YES for the bill.

“An affirmative Vote for the bill will be another historic step to secure the future of youths and indeed the next generation.

“As we prepare for the 2019 general elections, the imperative for youth inclusion, especially as candidates for all elective positions is not a matter for debate but a constitutional imperative.

“The movement demands that the states’ Houses of Assembly speedily pass the Not-Too-Young To Run bill.’’

Itodo said that the 2019 elections presented an opportunity for young people to assert their power not only as voters or campaign merchants, but as qualified electoral candidates.

He said that data from the Independent National Electoral Commission (INEC) indicated that about 52 per cent of registered voters were young people between the ages 18 to 35 years.

He said that the movement would continue to mobilise more young people across the country to participate in the ongoing continuous voter registration, collection of Permanent Voter Card (PVC) and turn out to vote in all elections.

Ms Bella Ndubusi, also a convener of the group, called on the remaining states assemblies to urgently pass the Constitutional Amendment Act, especially the Age Reduction bill in the interest of Nigeria and democracy.

Ndubusi urged the National Assembly to transmit the constitutional amendment bills to the President for assent as soon as the amendments were received from the states.

She said that the bill was Nigeria’s largest and most successful youth movement in recent times, adding that the organisation was driven by the compelling need to restructure the country’s political system.

According to her, this will address the deeply entrenched system of political exclusion and institute inclusive politics, transformative leadership and electoral competitiveness in the electoral process.

She said that any further delay would not only undermine Nigeria’s democracy but could negatively impact on the 2019 elections.

Tags:   Not Too Young to Run