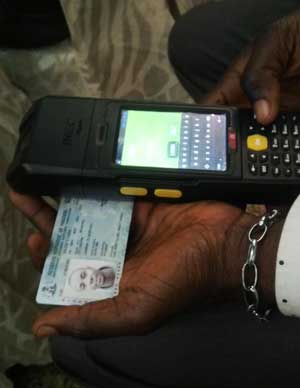 The electronic transmission of election results proposed by INEC will lower logistics cost of the electoral process and minimise problems caused by Plateau’s difficult terrain, according to Plateau INEC Commissioner, Husaini Yau.

INEC Chairman, Prof. Mahmood Yakubu, recently announced that results of the 2019 general elections would be transmitted electronically from the voting points.

He said that the measure would enhance the credibility of the process and speed up the collation of the final outcome at all levels of the exercise.

Reacting to the proposal in an interview with the News Agency of Nigeria (NAN) on Wednesday in Jos, Yau said that the measure would lower the logistics cost of the electoral process, especially in the area of security and transport.

“Logistics consume a lot of our resources during elections. It is second only to the allowances paid to permanent and ad-hoc staff handling the process.

“We pay a lot to security men that escort our personnel conveying ballot boxes from the election points, so as to ward off ballot box snatchers.

“If the results are transmitted electronically, it will be pointless for anyone to snatch the ballot box because the result would have been transmitted and captured at the final collating point long before the arrival of the papers,’’ he said.

Yau said that Plateau would be the best beneficiary of the e-transmission system because of its terrain.

“In most cases, their results come very late. In other cases, our personnel are ambushed and the boxes snatched or destroyed at gunpoint by political thugs.

“Once the results are already transmitted, it will be pointless to snatch the boxes because the results would have been conveyed while collation can go on without waiting for any paper record,’’ he said.

He listed the most difficult terrains to include Pankshin, Kanke, Bassa and Quan Pan, saying that INEC personnel had been sent to “deep rural and hilly areas’’ to ascertain the networks that were available there.

“We are planning ahead; we are working toward making elections stress free, credible and fast,’’ he said.

On the Continuous Voters Registration (CVR) exercise, he said that the state had captured 153,059 new voters since the exercise began last year.

He said that more people had been captured in the last one month following the establishment of mobile and rotational centres.

Making a comparative analysis of the turn out, he said that 33,333 voters were registered in the first three months of the exercise last year.

“But within two weeks in January, 26,451 were registered because we were reaching out to communities and arranging on specific days to visit them with the CVR machines.

“Clearly, the strategy is working; instead of waiting for the people to meet us at designated centres, we are reaching out to them through the 180 Registration Areas in the state,’’ he said.

Yau, however, regretted that more people were engaging in multiple registration, saying that measures were being adopted to check that.

He also alleged that under-aged children were trooping out to be captured, and thanked the registration officers for resisting them.

“We also have to move with power generating plants because most of the areas have no light. That has increased the cost of the exercise, but we have to make such sacrifices for democracy to flourish,’’ he said.